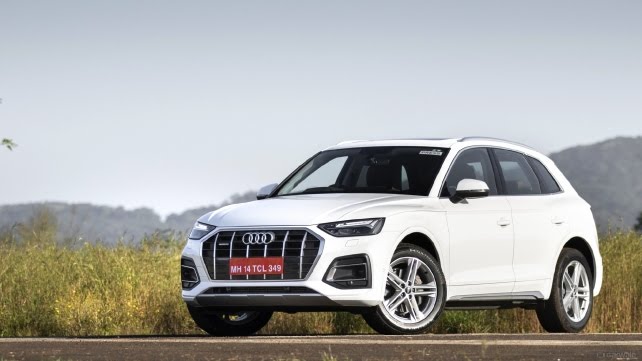 Audi has launched the new Q5 in the country with prices starting at Rs 58.93 lakh (ex-showroom). This compact luxury SUV is available in a choice of two variants. That said, the Q5 has already received over 100 reservations and its first batch has been sold out for 2021.

With the new Q5, Audi now has three SUVs in the Q family on offer, which also include the Q2 and Q8 besides the performance version RS Q8. This is also Audi’s ninth launch in this financial year after the carmaker launched as many as five electric vehicles.

2021 Audi Q5 is available in two variants – Performance Plus trim and the higher-spec Technology trim. The price of the latter goes up to ₹63.77 lakh (ex-showroom).

Audi hopes the new Q5 to boost its sales of ICE cars in India as it gets ready to take on rivals like the BMW X3, Mercedes GLC or even the newly-launched Volvo XC60.

The new Q5 gets a massive change in terms of its exterior and interiors plus a petrol engine. Standard is a 7-speed S-Tronic dual-clutch gearbox.

Under the hood, Audi has provided it with a 2-litre turbo-petrol engine (249PS/370Nm), mated to a 7-speed dual-clutch automatic driving all four wheels. It also has six driving modes: Efficiency, Comfort, Dynamic, Off-road, Auto, and Individual (along with damping control for suspension).

There is Quattro of course, along with having a suspension with damping control on all four wheels. The design also gets more aggressive with a larger single-frame grille with vertical struts, newly redesigned bumpers, and new 19inch wheels (S-design). In short, the new Q5 looks sportier than the earlier model- especially with these new wheels.