The 9.02 km long tunnel passes through Rohtang pass and it is the longest highway tunnel in the world 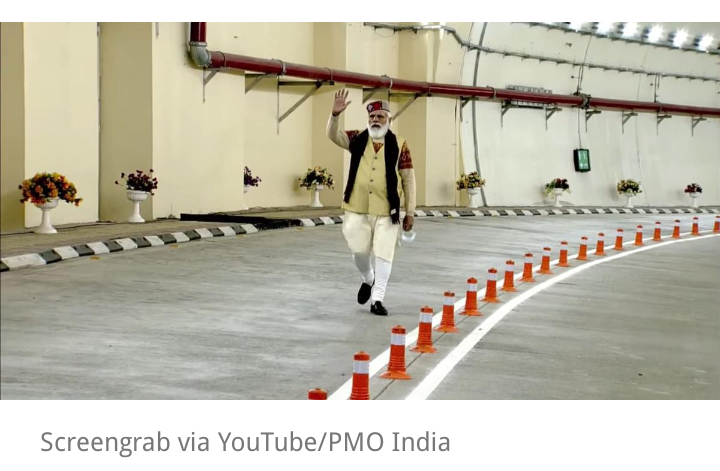 Prime Minister Narendra Modi on Saturday inaugurated the new tunnel that not only promises a Manali to Leh drive all through the year, but also reduce the travel time between the two cities massively.

The 9.02 km long tunnel passes through Rohtang pass and it is the longest highway tunnel in the world, connecting Manali to Lahaul-Spiti.

It has many popular features for local residents and will further ‘Ease of Living’. He tweeted on Saturday that he will also enter public programs in Sissu in Lahaul Spiti and Solang Valley.

On June 3, 2000, former Prime Minister Atal Bihari Vajpayee agreed to construct a strategic tunnel under the Rohtang Pass. On May 26, 2002, the cornerstone was laid.

In 2019, to honour the contribution made by him, the government agreed to name the tunnel after former PM Vajpayee.

As part of the inauguration ceremony, Modi walked in the tunnel and took a ride in it in an open-vehicle.

The Prime Minister also flagged off a bus carrying 15 passengers from the north portal of Atal tunnel in Sissu, Lahaul Valley for the south portal for the tunnel.

He lauded the efforts of the engineers, technicians and workers who risked their lives in making this dream come true.

He also said that farmers, horticulturalists and youth will now also have easy access to the capital of Delhi and other markets.