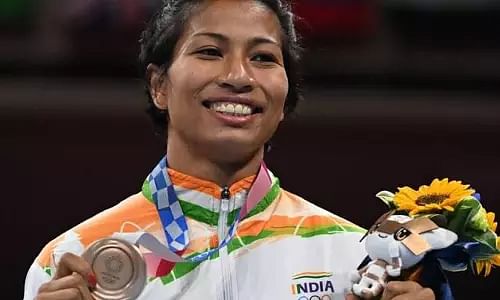 Olympic bronze medallist Lovlina Borgohain has been appointed as the brand ambassador for Samagra Shiksha Abhiyan (SSA) of Assam, state Education Minister Ranoj Pegu said on Sunday. “We are delighted that Lovlina has accepted our request to be associated with the SSA as its brand ambassador,” Pegu told reporters on the sidelines of a Teachers’ Day function here.

Sharing details of the agreement with the star pugilist, SSA, Assam, MD Roshni Korati told PTI that Lovlina Borgohain was approached to be the brand ambassador for SSA in the state, to which she readily agreed.

“Her role as the brand ambassador is on a completely honorary basis at her insistence. It is a very good gesture on her part,” Korati said.

Korati further said a video has been shot by SSA, Assam, exclusively with the boxer, a 40-second promo of which was shared by the MD on her Twitter handle on Sunday.

“It was shot over two days in Guwahati during Lovlina’s recent visit. She will be helping promote the various activities of SSA, Assam, across the state,” she added.

Honda Activa 6G vs TVS NTORQ: How do you choose the best? We compare them on each front to facilitate decision making

Citroen E-C3 EV car: The variant to have powerful battery, strong engine and affordable price range, all you need to know

iQOO Z6 Pro 5G: A phone that is smart in more ways than one, buy it at a substantial discount from this place