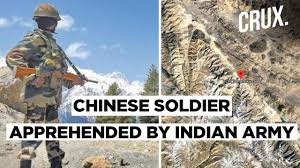 Security force have arrested a Chinese soldier in Chumar-Demchok area of ​​Ladakh amidst tension between India and China over LAC. They said that he must have inadvertently entered Indian territory. Currently, the Chinese soldier’s Icard has been checked, some more documents have also been recovered. The soldier says that he had entered the Indian border in search of his yak. Intelligence agencies are still questioning him.

In this regard, the Indian Army has issued a statement saying that the PLA soldier has been identified as Corporal Wang. Which was caught after crossing the LAC in Demchok sector of East Ladakh. Medical assistance, food and warm clothes have been provided to protect her from extreme altitude and harsh climatic conditions.

After being detained, the PLA soldier was given medical assistance, including oxygen, food and warm clothing, to protect him from extreme altitude and harsh climatic conditions. The PLA of China had requested the Indian Army about the missing soldier.

According to the established protocol, the Chinese army was handed back to the Chinese authorities at the Chushul-Moldo meeting point after completing the formalities. According to protocol, a soldier who crosses the border unknowingly is sent back to his country.