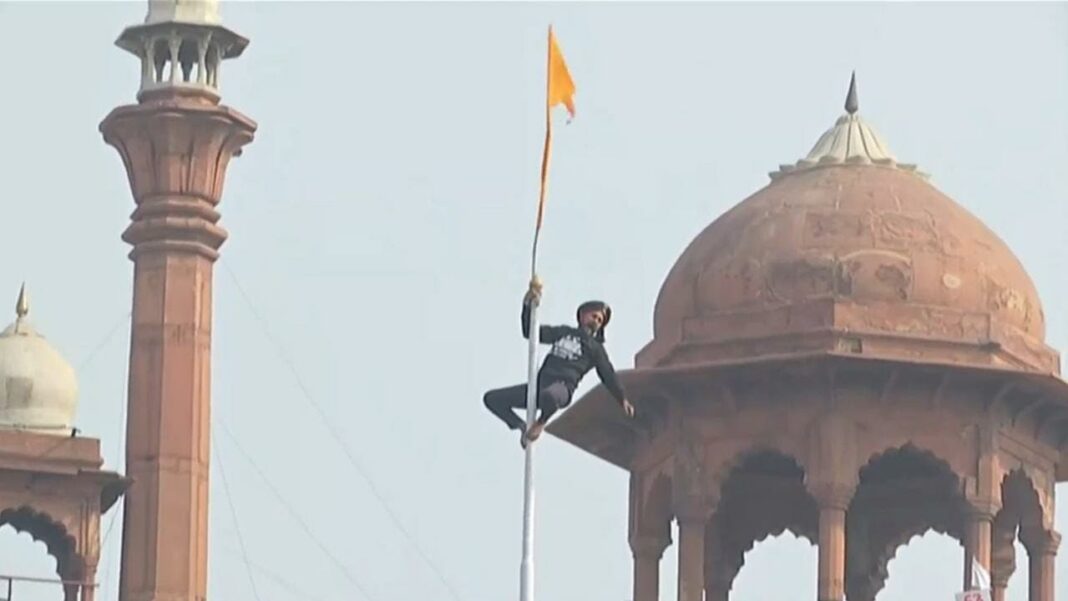 Farmers in the country’s capital Delhi have reached the Red Fort after a clash with the Delhi Police near the ITO. Meanwhile, the protesters have hoisted the Khalsa Panth on the Red Fort. The uproar of farmers continues. Farmer agitators are raising slogans constantly.

Now the police is engaged in taking down the flag of Khalsa Panth from the Red Fort. No other flag can be hoisted on the Red Fort except the national flag of India, the tricolor.

The protesters who reached the Red Fort have started an uproar. Along with this, the flag of the organization has been hoisted by the agitators from the ramparts of the Red Fort. This flag is hoisted there, where on 15 August the Prime Minister hoists the tricolor.

Today, the farmer agitators attacked the police team with swords and lathi poles near ITO in Delhi. During this, many policemen were injured. The farmers have also thrown stones at the police team.

Delhi Police fired tear gas shells to control the crowd of farmers. After which the farmers became more agitated. The farmers also tried to put a tractor on the police team.

Delhi Police repeatedly tried to convince the farmers to take out the tractor rally in a peaceful manner, but the farmers did not agree. The farmers broke the barricading of the Delhi Police and proceeded towards the Red Fort.

At the same time, police and farmers have come face to face with the ITO. Protesting farmers are throwing stones at policemen. In response, the police are also dropping tear gas shells.

All roads leading from East and North East Delhi to Central Delhi have been closed by the police. No traffic is being allowed. At the same time, the confrontation between police and farmers on ITO continues. Tear gas shells are being fired by the police. Farmers still stand.