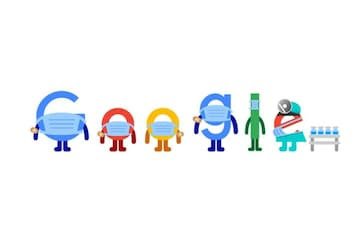 Amidst the negligence on the part of people regarding corona virus infection, the search engine Google (Google Doodle on COVID-19) has tried to make people aware of this epidemic once again through doodle. Through its doodle, Google has talked about the importance of wearing masks and vaccination against Covid-19. Along with this, the company is also providing information to the users about the vaccination centers around them. Since the beginning of the corona virus epidemic, experts have been constantly advising wearing masks, maintaining cleanliness, maintaining a distance of at least 2 yards between two people. However, in the beginning, many people are now seen being careless about these measures implemented rapidly.

The figures regarding masks were presented by the Union Health Ministry in May. Through this it was revealed that half of the people of the country were not wearing masks. The special thing is that out of half the people who used the mask, only 14 percent were able to wear it properly. According to media reports, these figures were collected after a study done on 25 cities.

The figures recorded on COWIN show that so far 97 crore 18 lakh 60 thousand 836 doses of anti-covid-19 vaccine have been given in the country. Of these, the number of first doses is 69 crore 37 lakh 12 thousand 553. Whereas, 27 crore 81 lakh 48 thousand 283 other doses have been applied. According to COWIN, at present immunization is being done at 42 thousand 994 centers in the country. Of these, 40 thousand 890 are government and 2 thousand 104 are private.