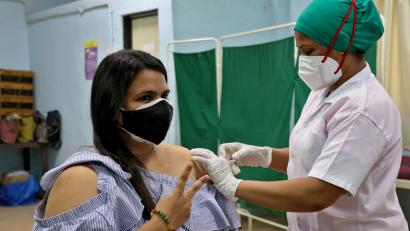 With India approaching the milestone of 100 crore COVID vaccinations, the government plans to project this as a major achievement in its fight against the pandemic. According to the data of the COWIN website, more than 96.75 crore vaccine doses have been given in the country so far. BJP sources have said that under the mega outreach plan, the party has asked its ministers, MPs, MLAs and national and state functionaries to participate in programs across the country.

The focus of this plan of the Center will be on those states where elections are to be held next year, including politically important Uttar Pradesh, Prime Minister Narendra Modi’s home state Gujarat, besides Punjab. The Congress in Punjab is battling one internal crisis after another.

According to sources, the vaccination figure is expected to reach the milestone of 100 crores by Monday or Tuesday. Sources said that due to the festivals of Durga Puja and Navratri, the vaccination exercise has slowed down a bit. The government is now trying to reach the 100 crore mark as soon as possible after Dussehra.

Sources said that under the plan, BJP leaders including ministers and MPs would visit vaccination centers where 100 per cent vaccination took place. There doctors and health workers will be honored. This milestone will be projected as an achievement of the Centre’s fight against Covid under the leadership of Prime Minister Modi.

Sources said the party will also use the occasion to spread awareness about other welfare schemes of the Centre.

Sources said party leaders have also been directed to share videos and pictures of these events and submit details of their media coverage.

After initial interruption due to short supply of vaccine and disturbances in COWIN, the Center changed the policy of Covid vaccination, after which the vaccination gained momentum. As part of the change, the Center had withdrawn control of vaccination from the states and announced free vaccination for all people above the age of 18 years.