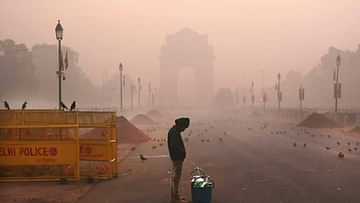 The air of Delhi, the capital of the country, still remains very bad, despite all the restrictions imposed by the government regarding pollution, no significant improvement has been seen. Although strong winds did marginally improve Delhi’s air quality on Monday, it remained in the “very poor” category. The overall air quality index (AQI) was 311 on Monday as compared to 349 on Sunday. The AQI is likely to touch the “poor” category on Tuesday, but may worsen again on Wednesday, as wind speed may slow down.

The Average Air Quality Index (AQI) in Delhi was recorded at 311 during the last 24 hours, which was lower as compared to 349 on Sunday. At the same time, the AQI was recorded in neighboring Faridabad at 330, Ghaziabad 254, Greater Noida 202, Gurugram 310 and Noida 270.

India Meteorological Department (IMD) senior scientist RK Jenamani said that the visibility improved to 3,200 meters with westerly winds gusting up to 25 kmph. He said that during November so far it was only Monday when Palam Meteorological Center recorded visibility of more than 3,000 meters and such strong wind.

“SAFAR”, an agency of the Ministry of Earth Sciences, which monitors air quality, said on Tuesday that the AQI remained at a very low level in the ‘very poor’ category. The agency attributed this to the reduction in incidents of stubble burning and strong wind.

Covid Update Today: 8,954 new cases of corona have been reported