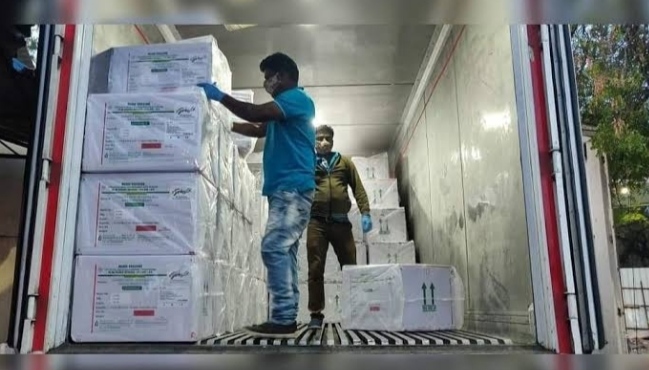 The first flight of the Covishield vaccine has arrived in Delhi for the proposed vaccination process from 16 January in India. Earlier, the first batch of vaccine was released from the Serum Institute of India, Pune. During this, the employees of the serum gave a farewell by clapping, while the drivers sitting in the truck also showed the victory sign. They were loaded into three trucks and taken to Pune Airport. From here the vaccine will be delivered to different parts of the country. from January 16, Saturday, vaccine will start in India too. India has two vaccines – the first Covaxin and the second Covishieldof Oxford Austrazenica, which was manufactured at the Serum Institute of India, Pune.

Pune zone-5 DCP Namrata Patil said, amidst adequate security arrangements, the first batch of vaccine has been dispatched from the Serum Institute of India, Pune.

The chairman of the airline Ajay Singh tweeted and informed about this. Ajay Singh wrote, I would like to say with pride that SpiceJet aircraft has reached Delhi from Pune with the first consignment of Covid vaccine this morning.