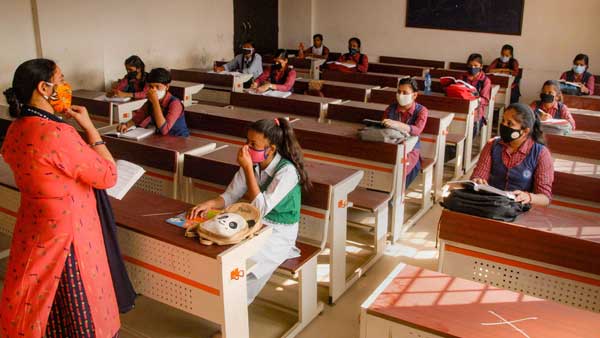 At least 10 students and one teacher have been found corona positive in a school in Chikkamagaluru district of Karnataka, after which the school building was sealed and declared as a containment zone. Chikkamagaluru District Health Officer Dr Umesh said that a total of 470 people, including students, teachers and non-teaching staff, were tested for corona at Jeevan Jyothi High School in Chikkamagaluru, out of which 11 people have tested positive.

He told that no symptoms of corona virus have been seen in those whose reports have come positive. After the report came, they has been kept in home quarantine.

All classes have been suspended and health department officials have been deployed at the school to monitor the situation.

Regular offline classes are going on in the state even after students and staff of several schools in Karnataka were found to be Corona positive.

Karnataka’s Primary and Secondary Education Minister BC Nagesh recently said that the government will not back down in examinations and closure of schools if corona cases increase. He also said that experts are of the opinion that there is no problem in continuing the regular offline classes.

A total of 320 new Covid-19 cases and two deaths were reported in Karnataka on Saturday. So far, the total number of infected people in the state has been 30,00,105, and a total of 38,257 people have lost their lives due to this.

Fever is a common symptom of Covid-19, follow these tips to get rid of it

Delhi Covid Update: 12,306 New corona cases have been registered in the last 24 hours