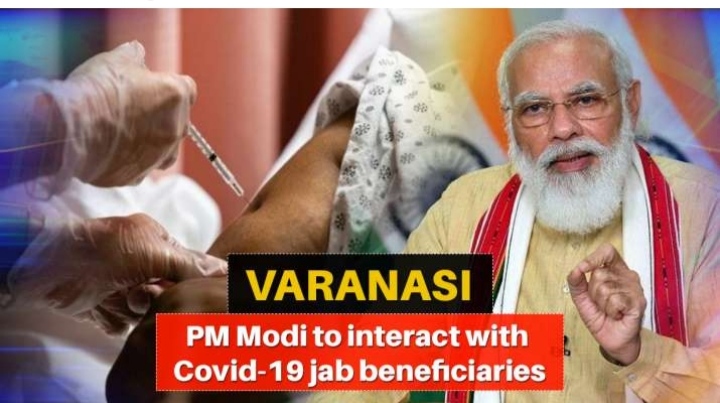 Today is the seventh day of the Covid vaccination campaign. Prime Minister Narendra Modi interacted with the beneficiaries of Varanasi . He described himself as a ‘servant of Kashi’, PM Modi also took feedback through video conferencing on the campaign which started from January 16.

The PM said in his inaugural address, “2021 has started with very auspicious resolutions. It is said of Kashi that here the auspiciousness turns into Siddhi. The result of this achievement is that today the world’s largest vaccination campaign is our Running in the country. Two Made in India vaccines have been prepared in India. In this case, India is not only completely self-sufficient but is also helping many countries. “

He said that ‘the entire infrastructure has benefited from the medical infrastructure that has been built in Banaras and surrounding areas in the last few years.’

-Today the world’s largest vaccination program is going on in our country and 30 crore countrymen are being vaccinated in its first two phases. Today, India is completely self-sufficient about this (vaccine) biggest need of the world, not only this, India is also helping many countries.

Pushpa Devi, the matron of the District Women’s Hospital of Varanasi, was the first to be vaccinated in Banaras.

She thanked the PM and said that in the first phase, I was first vaccinated. I consider myself extremely lucky. I feel safe. ‘

Pushpa said, “I don’t have any side effects. Just like other injections, so did this injection.”

PM Modi said that ‘this is the success of millions of crores of corona warriors like you and 130 crore Indians’.

When asked about the side effects and asked if she could say so with confidence. Pushpa said that there should be no fear in the mind that something will happen with the vaccine.