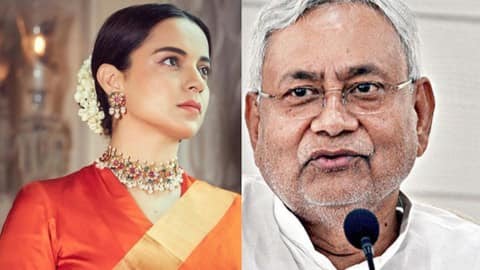 Bihar Chief Minister Nitish Kumar refused to be drawn into commenting on actor Kangana Ranaut’s provocative comments suggesting that India’s Independence in 1947 was a ‘bheek’ or handout, adding that such statements are to be made fun of and ignored.

“How can anyone publish this. What does it mean? Should we even notice it. Should we even pay attention to it? Who doesn’t know when we got Independence. These statements deserve zero importance. In fact it should be made fun of. They are deliberately made to garner publicity. I do not pay attention to such people. These things don’t register with me,” said the Chief Minister.

The JD(U) leader further said that comments like the one made by the National Award-winning actor should, in fact, be mocked. “We are living in the age of social media. If someone says something, people on social media will respond to it.” Kumar remarked.

Ranaut recently stoked a major controversy when she told a news channel that India became free only in 2014. “…blood will flow. But it should not be Hindustani blood. They knew it and they paid a price. Of course, it was not freedom but bheek (alms) and we attained real freedom in 2014,” she said.

“Ms Kangana Ranaut’s statement heaping insult on the courageous freedom fighters led by Mahatma Gandhi, Nehru and Sardar Patel but also belittling the sacrifices of revolutionaries like Sardar Bhagat Singh, Chandrashekar Azad and several others,” he said in a series of tweets.

Sharma urged President Ram Nath Kovind to immediately take back the Padma award given to Ranaut.