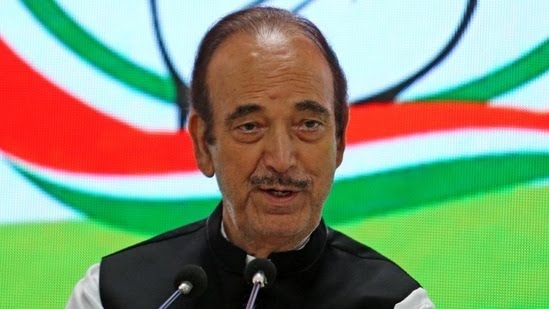 Congress has suffered a major setback in Jammu and Kashmir. Here after the resignation of Ghulam Nabi Azad, there was a flood of resignations. On Tuesday, 64 leaders of Jammu and Kashmir simultaneously resigned from the Congress. Among the leaders who resigned include big leaders like former Deputy CM Tara Chand, former minister Majid Wani, Manohar Lal Sharma. All these leaders will join the new party led by Azad on Sunday.

‘Leaders of other parties will also be involved’

All these leaders resigned from the Congress in the presence of Ghulam Nabi Azad. Former Deputy CM Tara Chand said that we are happy that Azad is forming his own party. The Congress high command did not bother to meet us even once, we wanted to express our grievances. But no one had any desire to listen to us. Leaders of other parties also contacted us. They will also join our (Azad’s party). Even the ruling BJP leaders want to join us.

Ghulam Nabi Azad was born on 7 March 1949 in Doda, Jammu and Kashmir.

He has done M.Sc from Kashmir University. He joined the Congress from the 1970s.

He became the President of Jammu and Kashmir Youth Congress in 1975.

In 1980, he was made the national president of the Youth Congress.

He won the Lok Sabha elections for the first time in 1980 from Washim, Maharashtra.

Azad was a Rajya Sabha MP from Maharashtra from 1990-1996. He was also a minister in the government of Narasimha Rao.

He also became the CM of Jammu and Kashmir in 2005. However, in 2008, the PDP withdrew support to the Congress. After this Azad’s government fell.

Azad was also the Health Minister in the Manmohan Singh government.

In 2014, Azad was made the Leader of the Opposition in the Rajya Sabha.

In 2015, Azad was sent to the Rajya Sabha from Jammu and Kashmir.