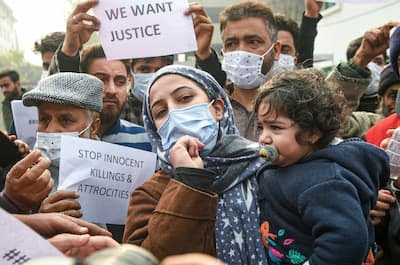 The Jammu and Kashmir administration on Thursday ordered a magisterial probe into the Hyderpora encounter in Srinagar.

“A magisterial inquiry by officer of ADM rank has been ordered in Hyderpora encounter. Govt will take suitable action as soon as report is submitted in a time-bound manner. JK admin reiterates commitment of protecting lives of innocent civilians & it will ensure there is no injustice,” Lieutenant Governor Manoj Sinha said in a tweet.

On Monday, a Pakistani terrorist, his associate Aamir Magray and two civilians – Altaf Ahmad Bhat and Mudasir Gul – were killed in the encounter in the Hyderpora area of Srinagar.

While Bhat was the owner of the shopping complex where the encounter happened, Gul was one of the building’s tenants.

Initially, police claimed the two were shot dead by terrorists, but later it said they may have been killed in the crossfire. Police said both the men were “terror associates.”

Families of Bhat, Gul and Magray have claimed the deceased people were innocent and demanded their bodies be returned. On Wednesday, protests were held at several places across the valley demanding an inquiry into their deaths.

Amir Magray’s father, Abdul Latief Magray, has alleged his son was killed in a staged encounter.

Abdul Latief Magray is publicly known as someone who is intensely vocal against terrorists. He lives in a remote village in Ramban district. He made headlines after killing a terrorist with a stone in 2005 and had received an Indian Army citation.

The relatives of Bhat and Gul staged a protest at Press Enclave till late night on Wednesday to press for return of the bodies of their kin for last rites.

The police, however, forcibly evicted the protesters and took them into preventive custody. The arrested persons were later released.

There has been a massive outcry over the Hyderpora encounter across Kashmir, with mainstream leaders, including former chief ministers, demanding handing over of bodies of Bhat and Gul back to their families for burial besides demanding an impartial probe.