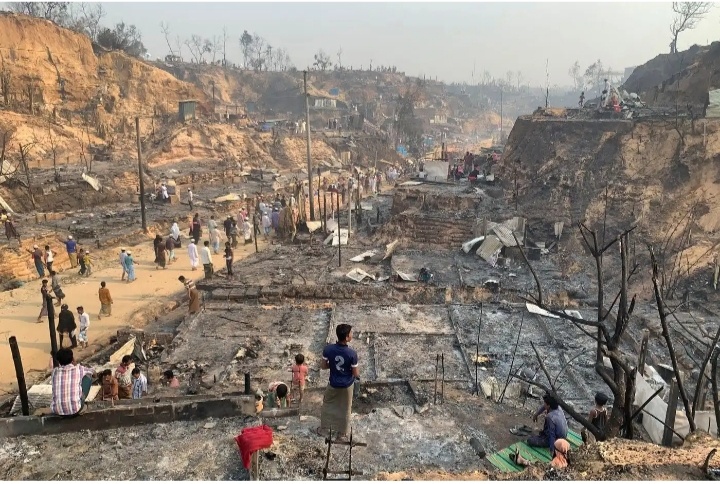 Rescuers recovered at least 15 charred bodies from a Rohingya refugee camp in southern Bangladesh after a devastating fire that destroyed thousands of shelters, officials said Tuesday.

At least 400 people were still missing and around 560 were injured by the fire, according to Louise Donovan, a spokesperson for the United Nations’ refugee agency. The UNHCR said around 45,000 people were displaced by the fire, which broke out Monday afternoon and burned well into the night.

The fire broke out Monday and left at least 50,000 people homeless as it ripped through their flimsy bamboo-and-tarpaulin shelters, according to police and aid groups.

Terrified families fled with whatever they could carry, with distraught children separated from their children in the rush.

It was just the latest blaze in recent weeks — and the biggest since 2017. Bangladesh has ordered a probe.

The U.N.’s World Food Program in a situation report said up to 87,855 people were affected by Monday’s fire, with many taking refuge in nearby camps, at friends’ shelters, learning centers for children or temporary transit sites.

The International Federation of Red Cross and Red Crescent Societies in a statement said more than 1,000 staff and volunteers worked through the night with firefighters, camp residents and other agencies to rescue people and douse the fire.

It said an estimated 123,000 refugees in the camps were affected by the fire. The differing figures between could not immediately be reconciled.

“We are providing relief through food and water, and erecting emergency shelters for people who have lost their homes. These devastating fires will require even greater efforts by all agencies in the coming weeks, particularly as the cyclone season approaches,” said M. A. Halim, head of operations in Cox’s Bazar for the Bangladesh Red Crescent Society, in the statement.

Humanitarian organisation Refugees International, which estimated 50,000 people had been displaced, said the extent of the damage may not be known for some time.

“Many children are missing, and some were unable to flee because of barbed wire set up in the camps,” it said in a statement.

Delhi MCD election results: Fierce fight is on between AAP and BJP