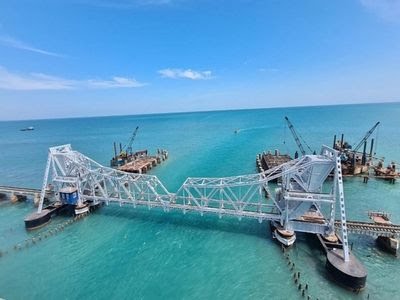 Pamban Bridge: The historic Pamban Bridge in Rameswaram, Tamil Nadu is about to retire soon. For more than 100 years, people have been traveling through this bridge between the Bay of Bengal and the Indian Ocean. The country’s only vertical lift bridge is being built in Pamban with new technology to replace it. First of all get to know the existing Pamban Bridge. The existing Pamban bridge connects the town of Mandapam in Tamil Nadu with Pamban Island and Rameswaram Island. This bridge was opened on 24 February 1914. Pamban Bridge is the first sea-bridge in India… which was built by the British to ease their trade route.

We tell you how the structure of the bridge which is visible in the pictures will work after all. The new bridge being built in Pamban will be about 2.1 km long. This bridge will be from Mandapam to Rameswaram Island. Travelers traveling from Rameshwaram to Dhanushkothi will also use this bridge. If all goes well, the bridge will be built by the end of December. The cost of more than 500 crores will come to build this bridge.

But building this new bridge will not be easy. understand why? The challenge is not just about strong winds, but to make it durable while protecting the bridge from salt water. The construction of a new bridge of Pamban may be challenging for the engineers, but once it is ready, it will be no less than an engineering wonder. Along with this, it will become the second largest bridge in the country built in the sea.