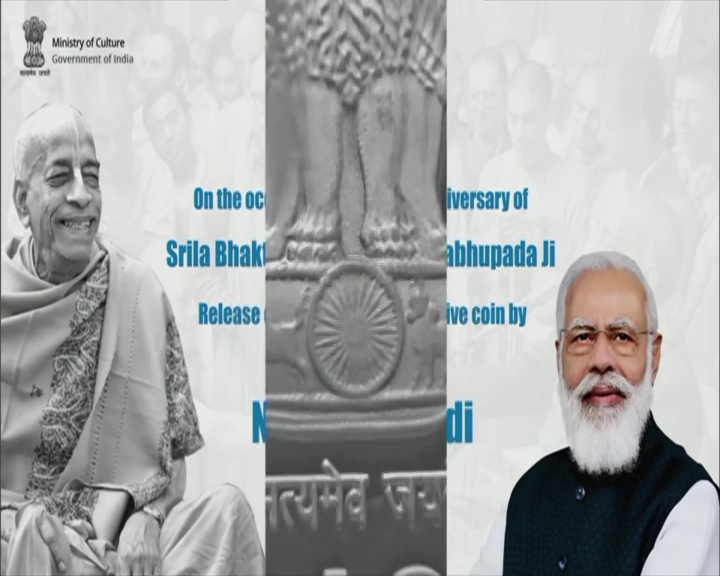 Prime Minister Narendra Modi on Wednesday released a special commemorative coin of Rs 125 on the occasion of the 125th birth anniversary of Srila Bhaktivedanta Swami Prabhupada, the founder of the Hare Krishna movement, through videoconferencing.

The event was attended by Union Minister G Kishan Reddy and several members of the International Society for Krishna Consciousness (ISKCON).

Who is Swami Prabhupada?

Srila Bhaktivedanta Swami Prabhupada was born Abhay Charan De on 1 September, 1896, to a pious Hindu family in Calcutta. While growing up, he was part of Mahatma Gandhi’s civil disobedience movement. However, later a meeting with a prominent scholar and religious leader, Srila Bhaktisiddhanta Sarasvati, in 1922 changed him.

Influenced by him, Abhay took the spiritual path and went on to introduce the English-speaking world to the teachings of Lord Krishna. He became a disciple of Srila Bhaktisiddhanta in 1933 and resolved to carry out his mentor’s request and thus ISKCON was born.

He has also established over a hundred temples and wrote several books. Swami died of a six-month-long illness in Uttar Pradesh’s Vrindavan in 1977 at the age of 82.

What is Commemorative coins?

Commemorative coins are issued to mark and honour particular personalities and events. They have a distinctive design with reference to the occasion for which they were issued. Many coins of this category serve as collector’s items only, although some countries also issue commemorative coins for regular circulation. Vast numbers of thematic coins are continuously issued, highlighting ancient monuments or sites, historical personalities, fauna and flora, the culture and traditions of a country and much more.

How to buy commemorative coins?

In 2006, the government took a decision to corporatise all the mints and presses. Accordingly, Security Printing and Minting Corporation of India Limited (SPMCIL), a wholly-owned Schedule ‘A’ Miniratna Category-I company of government of India, was incorporated. The management, control, maintenance and operations of the erstwhile nine production units under currency and coinage division of ministry of finance was transferred to SPMCIL.

These Indian commemorative coins can be ordered directly from the mint or through the mint’s or SPMCIL’s internet portals. In most cases, advertisements for such bookings appear in newspapers, and there is a time limit on when such sets can be booked. Bookings typically begin approximately three to six months in advance.