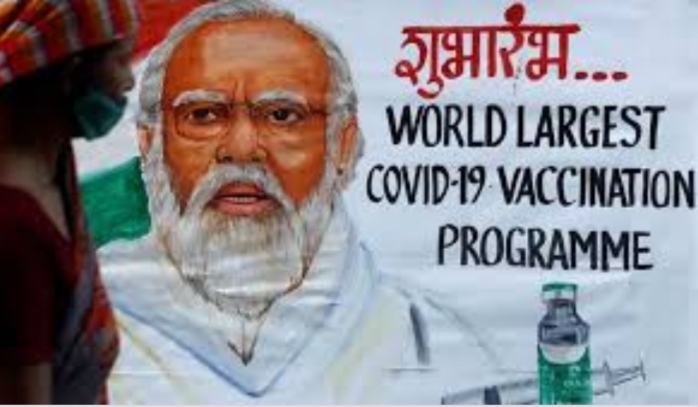 Prime Minister Narendra Modi virtually kicked off world’s largest Covid-19 vaccination drive. He started with a speech addressing more than 3,000 centers across India where the first shots were to be given.

PM Modi started the first phase of vaccination campaign through video conference at 10:30 am.

PM said that ‘I want to remind you again that it is very important to have two doses of corona vaccine. Between the first and second doses, a gap of about one month will also be kept. Only 2 weeks after the second dose, your body will develop the necessary strength against the corona.

Prime Minister Narendra Modi said that ‘India’s vaccination campaign is based on very human and important principles. The one who needs it the most, will get the corona vaccine first.

While inaugurating the program, PM Modi said, ‘ for today the whole country has been waiting impatiently. For many months, in every house of the country, there was a question on the tongue of everyone, when corona vaccine come.

Addressing the country, PM Modi said, ‘Three crore people will be vaccinated in the first phase of the vaccination campaign. In the second phase, we have to take it to the number of 30 crores. Those who are elderly, who are suffering from serious illness, will get vaccinated at this stage. You can imagine, there are only three countries in the world above the population of 300 million – India, China and America itself. Never before has such a large-scale vaccination campaign been run in history.”

PM Modi said that India’s vaccination principle is based on human principles. The person who has the highest risk of corona infection will be the first to be vaccinated. Doctors, nurses, health workers, whether they are in a government hospital or a private hospital, will get the vaccine on a priority basis. After this, the front line works will get vaccinated, whose number is around 3 crore. There is a system from registration to tracking in CoWin App for vaccination.

On this occasion, the Prime Minister also referred to the words of Rashtrakavi Ramdhari Singh Dinkar, ‘When a human exerts force, the stone becomes water’. PM Modi’s virtual address was connected to all the vaccination centers.

The Prime Minister said that January 17, 2020 was the date when India released its first advisory. India was one of the first countries in the world to start screening passengers at its airports. India kept vigil 24 hours, keeping an eye on every event, and took the right decisions at the right time.

PM Modi said that the nation is not just made of soil, water, pebbles, stones, but the nation means our people. No matter how big the crisis is, the people of the country have never lost confidence. When Corona arrived in India, there was only one lab of Corona Testing in the country, we believed in our ability and today we have more than 2,300 networks.

Union Health Minister Dr. Harshvardhan said that ‘I am very happy today, the vaccine will work as a lifeline in the war against COVID-19. India has previously won the war against polio and smallpox and now India has reached the decisive phase of winning the battle against Covid-19 under the leadership of Prime Minister Narendra Modi.’

Defense Minister Rajnath Singh said in a tweet that ”Today, Prime Minister Narendra Modi has taken the decisive step towards conquering the corona crisis by launching the biggest vaccination campaign not only in India but the whole world. In the first phase, it has been resolved to bring vaccine to three crore people.”

The Prime Minister said that ‘Never before has such a large-scale vaccination campaign been run in history. There are more than 100 countries in the world, whose population is less than 30 million and India is vaccinating 3 crore people in its first phase of vaccination.”

“India’s vaccines enjoy much credibility world over. We’ve earned this with our track record. Most children in the world get their vaccine shots of those made in India. The world’s trust is on our ‘Made in India’ vaccines will rise soon. These Indian vaccines are cheaper than foreign shots and easy to use. Some foreign doses are close to Rs 5,000/dose and need to be stored at minus 70 degrees,” said PM Modi, lauding India’s efforts in developing vaccines against Covid-19.