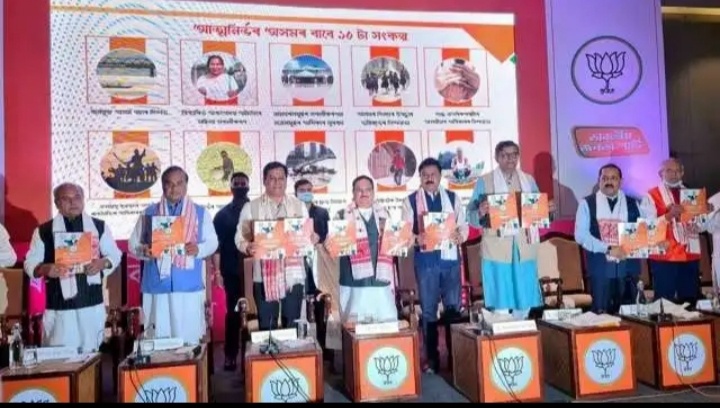 The Bharatiya Janata Party has promised to initiate the process of correcting the National Register of Citizens (NRC) to “protect genuine Indian citizens and exclude all illegal immigrants” as part of its manifesto for the poll-bound Assam.

Unveiling the “Sankalpa Patra” in Guwahati, BJP national president, JP Nadda said, “We are committed to bringing a corrected NRC to secure and protect Assam…We will protect genuine Indian citizens and detect illegal infiltrators so that Assam can remain Assam’s.”

The National Register of Citizens (NRC) is a list of people who can prove they came to Assam by March 24, 1971, the day before neighbouring Bangladesh declared independence from Pakistan. People left out will have 120 days to appeal against their exclusion.

The Supreme Court mandated and monitored NRC draft was announced on July 30, 2018. More than four million people had their names excluded from the list.

Many student unions, political parties, and even the administration have tried to show that there would be no violence in the aftermath. Other groups have pointed out that the exercise was faulty and the rhetoric that pushed it was divisive in nature.

The Citizenship Amendment Act that gives citizenship to all minorities from India’s neighbouring Muslim majority countries was passed by Parliament on January 8, 2019. It led to a peculiar situation: organizations that welcomed the NRC came out in opposition to the Act, while many who were opposed to the NRC, especially in the Barak Valley, supported the CAA.

The party also made ‘ten commitments’ in the manifesto — one of which is initiation of a process to “correct and reconcile” the entries made as part of the Supreme Court-mandated National Register of Citizens (NRC) exercise, as it seeks to “protect genuine Indian citizens and exclude all illegal immigrants”.

The Citizenship Amendment Act, which caused widespread protests in Assam, is not mentioned among the 10 points of the manifesto. However, Nadda said the Central legislation would be implemented in letter and spirit.

Meanwhile, manifesto also promised to build big reservoirs around the Bramhaputra River to conserve extra water under the “Bramhaputra Vision” to save people from floods.

“30 lakh deserving families will be paid financial support of Rs 3,000 per month under Orunodoi Scheme,” the manifesto said.

“Assam will become the fastest job creator state in the country. The BJP has committed to provide 2 lakh jobs in the public sector, of which 1 lakh will get jobs by March 31, 2022,” he said, adding that the party would also provide 8 lakh jobs in the private sector. The BJP is contesting elections in alliance with the Asom Gana Parishad (AGP) and the United People’s Party Liberal.