Bihar: Know what happened on budget day, Why Bihar MLAs Were Thrashed At Assembly 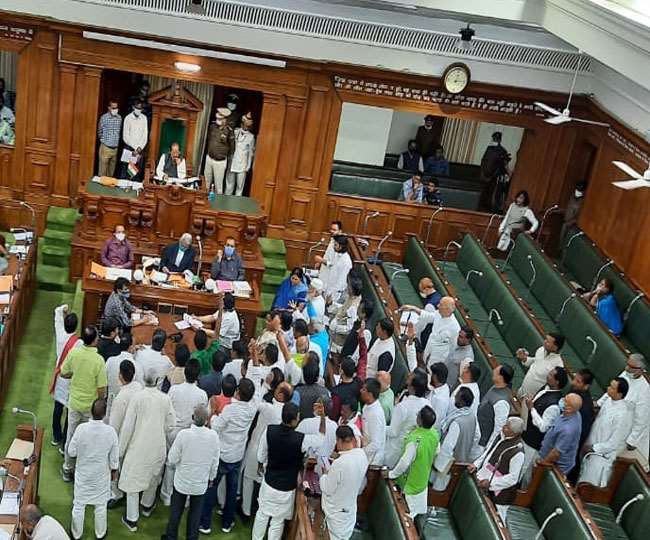 On Tuesday, the 20th day of the budget session of the Legislature, there was a huge uproar against the Police Act Bill 2021. After the adjournment for 4 times, the legislators of the opposition took the Speaker of the Legislative Assembly Vijay Sinha hostage in his own chamber.

Pushed with DM and SSP. MLAs of the opposition also clashed with policemen near the Chamber. After this, the security personnel started throwing out the MLAs of the opposition one by one. During this, RJD MLA Satish Kumar Das fainted from Makdumpur. It is being told that for the first time in the history of the Vidhan Sabha, such a ruckus occurred. The Bihar Special Armed Police Bill 2021 was passed after the speech of CM Nitish Kumar after the high voltage drama. After that, the house was adjourned till tomorrow. Vidhan Sabha Speaker Vijay Sinha said that such violence never happened before today in the Vidhan Sabha. Today the opposition created an unprecedented uproar. Members of the ruling party showed restraint in this uproar. The speaker said that action will be taken against the legislators who created a ruckus.

Bihar’s Leader of Opposition Tejashwi Yadav targeted the Chief Minister Nitish Kumar and his governments, protesting against the bill giving more power to the police force during the opposition’s protests in the state assembly.

He said that Mr. Kumar had found “unarmed MLAs of his party within the House”. He shared pictures of one of his MLAs being taken from the Assembly on a stretcher after allegedly being molested by ‘police and local goons’ during the protest.

The Rashtriya Janata Dal (RJD) leader tweeted in Hindi, “My revolutionary fellow MLA, Satish Das, who belongs to a poor family, fell victim to Nitish Kumar’s hooliganism. He suffered a head injury. The picture is proof of that. “

Many videos are also going viral on social media, in which the police and administration people can be seen inside the house beating the MLAs with kick and punches.

In this violent clash inside the Legislature, a total of 12 MLAs, including two women legislators, have suffered injuries, many policemen and media persons have also been injured. All have been admitted to PMCH for treatment.

According to the information, RJD supporters led by RJD leaders Tejashwi Yadav and Tej Pratap Yadav also demonstrated outside the assembly. During this time, when they tried to surround the assembly, the police used a water canon, which provoked RJD cadres and threw stones. When they tried to proceed by breaking the barricading, the police fiercely killed sticks.

Even after this, thousands of RJD workers led by Tejashwi Yadav and Tej Pratap Yadav reached and started shouting slogans. During this time, there was a constant appeal from the police and administration that they should work with restraint. The crowd was intent on moving towards the assembly. During this time barricading was broken and also punched. Water canon was used by the police to control the crowd.