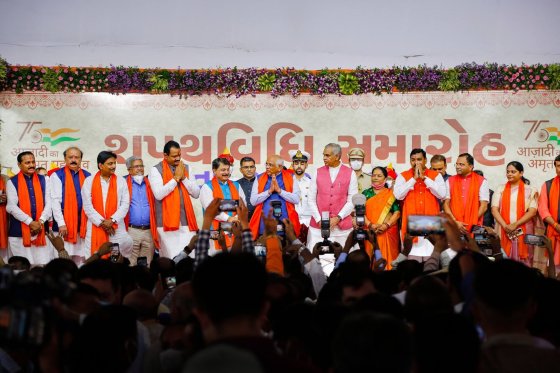 On Thursday, 24 ministers were sworn into the new Cabinet of Gujarat Chief Minister Bhupendra Patel.
The ministers were administered the oath of office by Governor Acharya Devvrat.

An MLA from Bhuj, Nimaben Acharya is the new Speaker of the Gujarat Assembly.

Rajendra Trivedi, who resigned as the Gujarat Assembly Speaker hours before the oath-taking ceremony, has also been alloted a ministerial berth in the new Gujarat cabinet.

Tribal MLAs including Naresh Patel and Jitu Choudhary also bagged a place in the Gujarat cabinet.

Meanwhile, Prime Minister Narendra Modi took to Twitter and congratulated all party colleagues who sworn in as Gujarat ministers.

“Congratulations to all Party colleagues who have taken oath as Ministers in the Gujarat Government. These are outstanding Karyakartas who have devoted their lives to public service and spreading our Party’s development agenda. Best wishes for a fruitful tenure ahead,” PM Modi tweeted.

The party is counting on Patel to shore up the party’s fortunes ahead of the assembly elections towards the end of next year. In the 2017 state election, the BJP won 99 of the state’s 182 Assembly seats and Congress got 77 seats.