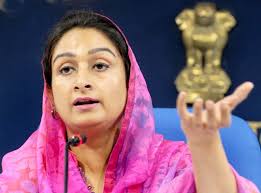 Harsimrat Kaur tweeted, “I have resigned from the Union Cabinet in protest against the anti-farmer ordinances and Bills.”

“Harsimrat Kaur’s husband and Akali Dal leader Sukhbir Singh Badal said that we will continue to be a part of the NDA and the Modi government will continue to support, but its anti-farmer Will oppose policies.

In her resignation submitted to the Prime Minister, she has written that the Government of India has decided to go ahead with the bill without addressing the apprehensions of farmers on the issue of marketing of agricultural produce.

The Shiromani Akali Dal cannot be part of any such issue that goes against the interests of farmers. Therefore, it is unbecoming for me to continue my service as a Union Minister.

She told reporters, “Thousands of farmers are on the road. I don’t want to be part of a government that passed the bill in the House without talking about farmers’ concerns. That’s why I resigned.