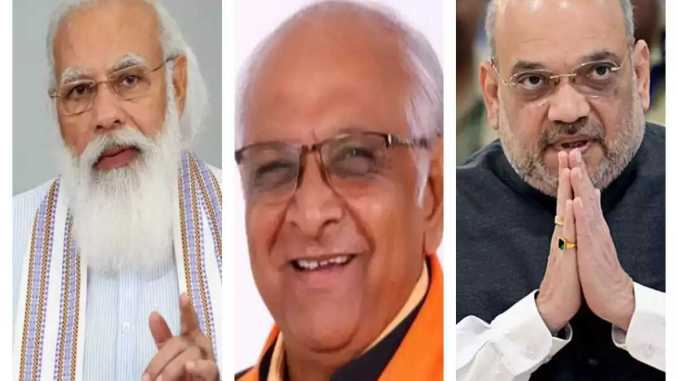 When the central leadership announced the name of Bhupendra Patel as the new chief minister at Kamalam, the Gujarat BJP’s headquarters, it was a surprise even for those who knew Narendra Modi’s style of functioning.

After the resignation of Vijay Rupani, the names of about six leaders were discussed for who would be the new Chief Minister of Gujarat.

The supporters of state president CR Patil were in such a hurry that even before the resignation of Vijay Rupani, he was written on Wikipedia as the 17th Chief Minister of the state. The matter must have reached CR Patil as well, so he released the video late on Saturday evening and said that he is not in the race to become the Chief Minister.

On Sunday, Nitin Patel, who was a strong leader and Deputy Chief Minister of the state, said on his claim, “Media is running my name on the basis of my experience, but the truth is that whoever will be decided by the BJP high command will be the Chief Minister.”

Apart from these two, the name of Praful Patel, the administrator of Lakshadweep, who is considered close to Narendra Modi, was also in the discussions. Along with this, names of contenders like Union Health Minister Mansukh Mandaviya, Purushottam Rupala and former state home minister Gordhan Zadafia were also emerging.

But according to his style of working, Narendra Modi has handed over the command of Gujarat to the man whose name no one could have guessed and the world outside Gujarat had never heard of him before.

Hari Desai, the state’s senior political journalist, says, “That has been Narendra Modi’s style of working, he looks for the man who goes unnoticedOne reason for this is also that they do not want to promote any strong leader in the state.”

At first glance, it appears that the BJP has made Bhupendra Patel the chief minister to please the Patidar voters in the state. A large section of the state’s Patidar voters have been continuously angry with the Bharatiya Janata Party for some time now.

Before the 2017 assembly elections, Hardik Patel’s trumpet of protest through the Patidar movement may not have reached the mark, but those protests forced the BJP to think. Due to the displeasure of Patels, the BJP which was claiming to get 150 seats, was reduced to just 99.

In fact, the Patel community is the most politically dominant section in Gujarat and has traditionally been a supporter of the Bharatiya Janata Party. Patel voters are decisive in 71 of the state’s 182 assembly seats. At the same time, in 52 seats, their population is more than 20 percent.

This is the reason that most MLAs in the Gujarat Legislative Assembly are elected from the Patel community. In 2017, the number of such MLAs was 44 in which 28 MLAs were from BJP while 23 MLAs were elected from Congress. Patel had 47 MLAs in Gujarat in the 2012 elections. Then 36 Patel MLAs belonged to BJP.

Political analysts in Gujarat also see this as Modi’s attempt to strike a balance of power between Amit Shah and Anandi Ben. It is noteworthy that Vijay Rupani was considered to be of Amit Shah camp.