IT raid at manufacturers of ‘Samajwadi Perfume’, claimed to close aide of Samajwadi party 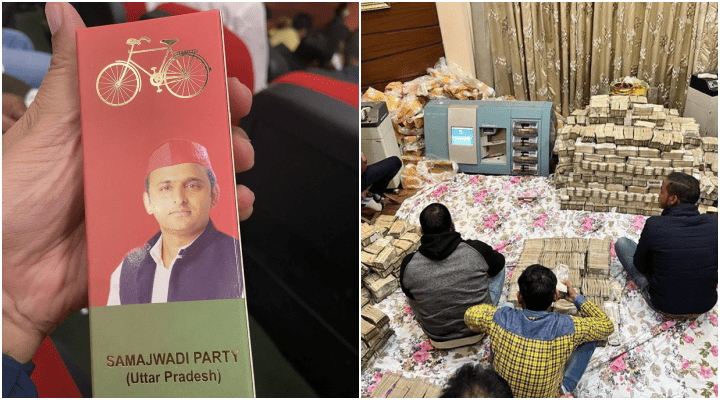 The Income Tax Department is in action before the elections to be held in Uttar Pradesh. Traders are being continuously raided in the state. At the same time, the IT department raided a Pan Masala manufacturer . At the same time, according to the news published in Hindustan, after the raid by the Income Tax Department, a big perfume businessman was also detained on Thursday.

The team of DGI (Director General of GST Intelligence) raided seven locations of the businessman and in this an undisclosed amount of about 150 crores has been revealed. The Income Tax Department has received Rs 90 crore in cash. The Income Tax Department has confiscated money in a house in Kannauj and this house belongs to perfume businessman Piyush Jain. Who recently launched Samajwadi perfume. According to media reports, four note counting machines have been brought to Kanpur and teams are investigating till late night.

According to the report, the investigation teams conducted simultaneous raids at three premises, residence, office, petrol pump and cold storage of perfume trader located in Kannauj, Kanpur. Along with this, the Income Tax Department has also raided the Mumbai showroom and offices of the businessman. According to media reports, in the raids of the Income Tax Department, a case of money laundering by fake companies has come to the fore. The department has caught at least 40 bogus companies and illegal money was being laundered through these companies.

Piyush Jain is a big businessman and he is close to Samajwadi Party President Akhilesh Yadav. Till now the Income Tax Department has not given any information officially. What was found there and how much cash was found. But in the election year, after the raid on the close of SP chief Akhilesh Yadav, there is a possibility of politics once again. However, according to the news of NBT, the Income Tax Department has got a huge amount of cash there.

As per reports, all office premises of Piyush Jain across Mumbai, Gujarat, Kannauj, his petrol pumps and residences have been raided simultaneously by IT and DGGI officials. Piyush Jain has been reportedly associated with Samajwadi Party and is considered close to Akhilesh Yadav. He had launched the ‘Samajwadi Perfume’ earlier this year.

The ‘Samajwadi Perfume’ was launched by Akhilesh Yadav in the presence of many senior SP leaders. Jain was present at the launch ceremony too, as per reports.