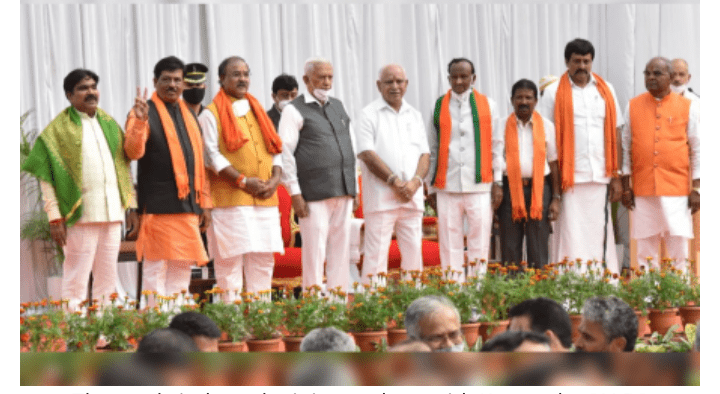 Karnataka Chief Minister BS Yediyurappa expanded his Cabinet on Wednesday with the induction of seven new ministers who were sworn in. Governor Vajubhai Vala administered the oath of office and secrecy to the Ministers at a ceremony at the Raj Bhavan.

While ministers’ portfolios are yet to be allocated, there were indications of a possible reshuffle following requests by some ministers to change their posts.

Minister H. Nagesh, Independent MLA, was dropped to keep one slot vacant, for political exigencies. An upset Mr. Nagesh, who resigned from the Cabinet, was pacified and appointed as chairperson of Dr. B.R. Ambedkar Development Corporation, as per his request with a Cabinet Minister rank, later in the day.

Recently elected MLA Muniratna — among those who resigned from the Congress-JD(S) coalition after being assured of a Cabinet berth — was left disappointed. Though he was among the favourites to be inducted, the BJP leadership decided against it as a case of electoral irregularities was pending.

The Cabinet expansion has led to discontent among a long list of ministerial aspirants. A group of those unhappy with the outcome are expected to meet and air their grievances with Union Home Minister Amit Shah, when he visits the State on January 16-17.