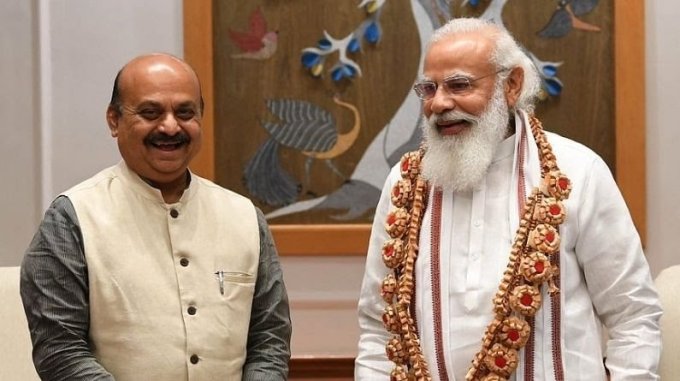 The new Chief Minister of Karnataka Basavaraj Bommai met Prime Minister Narendra Modi in New Delhi today and took his blessings. Sharing the picture of this meeting, Prime Minister Narendra Modi said, “Today met Karnataka Chief Minister Basavaraj Bommai and wished him all the best for the beginning of his new journey. Along with this, he has also assured full support for the development of Karnataka. “

During the meeting, CM Bommai demanded from PM Modi to approve an institute like AIIMS for Hubli-Dharwad and Raichur. He also appealed to the Prime Minister to upgrade the ESIC Medical College and Hospital in Kalaburgi to a regional AIIMS like institution.

This is Bommai’s first visit to the national capital after taking over as the chief minister. Earlier, he also met Home Minister Amit Shah, Defense Minister Rajnath Singh and BJP President JP Nadda.

Before the meeting, when Bommai was asked whether he would talk to the central leaders about the cabinet expansion, he said that the Bharatiya Janata Dal (BJP) is a national party and it is normal to have expectations. He said that in his meeting with the BJP President, he will take instructions on the issue of cabinet expansion in the state.

Bommai had said, ‘Our party has the power to fulfill expectations. In the meeting with Nadda ji, let us see what instructions we get regarding cabinet expansionBommai was on Tuesday elected the new leader of the BJP Legislature Party following the resignation of erstwhile BS Yediyurappa and took oath as the chief minister on Wednesday.

Regarding the cabinet expansion, Karnataka Chief Minister Basavaraj Bommai had said in the state on Thursday that he would discuss the issue with the party’s central leadership in the coming days. Bommai had said, “When I go to Delhi to meet the central leadership, then I will try to meet Karnataka MPs and Union ministers also regarding pending projects and issues related to the state.”

The Karnataka Chief Minister also met Jal Shakti Minister Gajendra Singh Shekhawat in Delhi and discussed about the Mekedatu irrigation project on the Cauvery river. He has also hosted a banquet for the MPs of Karnataka on Friday.