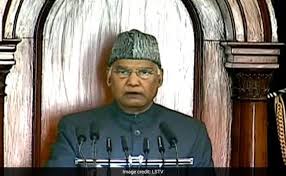 President Ram Nath Kovind said in the backdrop of the flag hoisting of the religious flag at the Red Fort during the tractor parade of protesting farmers on 26 January, that the insult of the tricolor on Republic Day is very unfortunate. He also addressed the joint sitting of the two houses of Parliament on the first day of the budget session, saying that the constitution gives us the right to freedom of expression, the same constitution teaches us that law and rule should be followed equally seriously.

It is noteworthy that about 20 parties including Congress have boycotted the President’s address on the issue of farmers’ movement. Kovind said, “After extensive consultations, Parliament seven months ago three important agrarian reforms, Farmers Produce Trade and Commerce (Promotion and Simplification) Bill, Agriculture (Empowerment and Protection) Price Assurance and Agricultural Services Agreement Bill, and Essential Commodities Amendment Bills have been passed. “He said,” The biggest benefit of these agricultural reforms also started getting more than 10 crore small farmers immediately. Realizing these benefits to small farmers, many political parties had given their full support to these reforms from time to time.

“The President insisted,” At present the implementation of these laws is the highest court of the country. Has postponed My government will abide by the Supreme Court’s decision with due respect. “

He said, “It is very unfortunate to insult the holy days like Tricolor and Republic Day in the past. The Constitution gives us the right to freedom of expression, the same constitution teaches us that law and rule should be followed equally seriously. “Kovind said, ” My government wants to make it clear that three new agricultural laws Before it was created, there was no reduction in the rights and facilities which were under the old system. Rather, through these agricultural reforms, the government has given new rights to the farmers as well as new rights. “