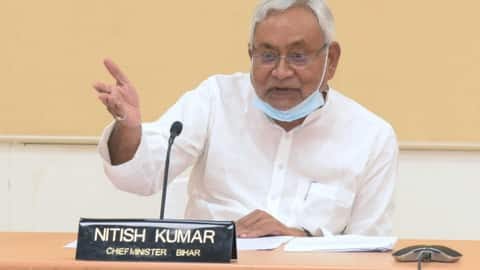 The cases of the new variant of Corona, Omicron, are increasing rapidly across the country. Experts believe that this will cause the third wave. Meanwhile, a big statement of Bihar Chief Minister Nitish Kumar has come. He said that the third wave of corona has started in the state. His statement has come at a time when 47 new cases of Covid-19 have been reported in the state during the last 24 hours.

While addressing the IMA convention on Tuesday, CM Nitish said, ‘The third wave of Covid epidemic has started in the state and all necessary arrangements are being made to save the people from it. The medical staff has made various preparations regarding this. The contribution of doctors in the first and second wave was commendable. I congratulate you for this. ‘

In view of the threat of Omicron, the state government has decided to keep all the parks and gardens in the state completely closed from December 31 to January 2. The Home Department has issued an order in this regard on Tuesday evening. In an order issued by the Home Department, it has been said that this decision has been taken to prevent the spread of Omicron infection and possible crowds in public places and events on New Year’s Eve and New Year.

So far, the new variant of Corona, Omicron, has not been confirmed in Bihar. However, in view of the increasing cases of corona cases, the sample is being sent for genome sequencing. The doctors are treating the new cases as delta and delta plus variants. After months, cases of Covid are being found in many districts of the state.

Earlier on December 25, CM Nitish Kumar ruled out the possibility of imposing restrictive measures in the state, amid rising cases of Omicron in the country. Whereas due to this variant, the night curfew was re-imposed in neighboring states like Uttar Pradesh.