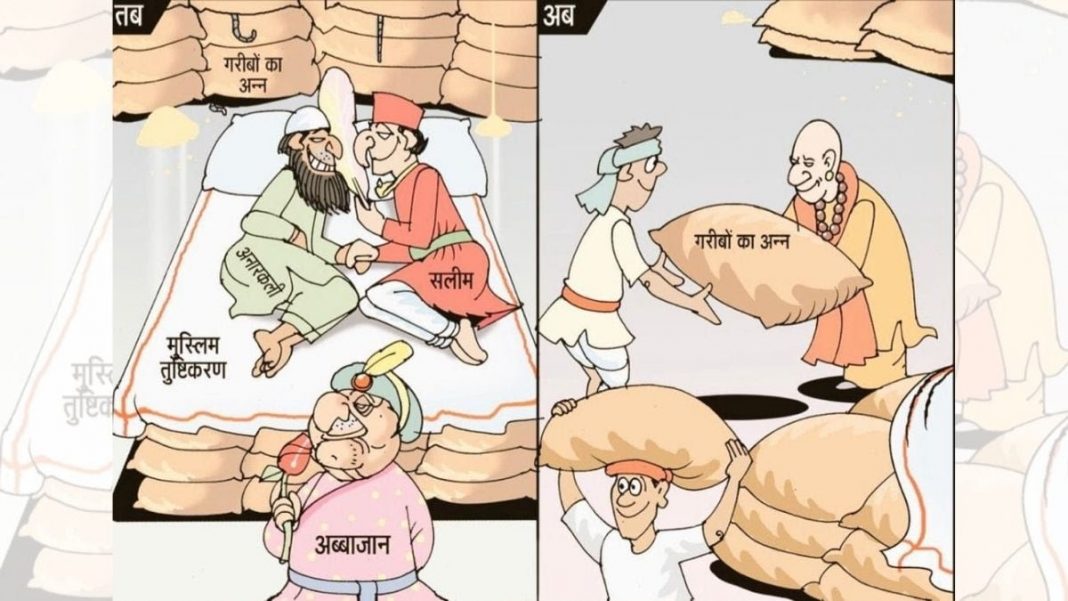 In the cartoon, the UP BJP depicts Owaisi and Akhilesh Yadav as Mughal emperor Jehangir and Anarkali, who are misusing rations meant for the needy as Mulayam Singh Yadav watches on.

Yogi Adityanath’s recent contentious remarks during an event in Uttar Pradesh enraged Akhilesh Yadav and Owaisi, as well as several other opposition leaders.

“Under PM Modi leadership, there is no place for appeasement politics…. Before 2017 was everyone able to get ration? Earlier only those who used to say ‘abba jaan’ were digesting the ration,” Adityanath had said in Kushinagar.

This led to a major furore across opposition parties, who accused Adityanath of blatant communalism. Owaisi had sarcastically referred to Yogi Adityanath’s ‘abba jaan’ remark saying it was a polarising tactic on part of ‘Baba’.

On the other hand, Akhilesh Yadav said, “Even after over four years, this government is changing names and colours, claiming the work done by the SP government as its own. As they know that their government is on its way out, the language of its head has changed.”

He claimed that when the Chief Minister visited Kushinagar a few years ago, children and the destitute were given soaps and shampoos to bathe in before seeing him. He stated, “Such a person cannot grow the state.”

In response to Yogi Adityanath’s claim that Akhilesh Yadav lacked vision, the SP leader requested that the CM have his eyes checked.