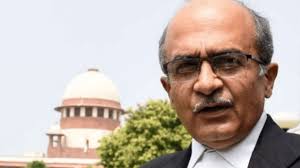 Lawyer Prashant Bhushan, has refused to apologise for his tweets on Chief Justice of India SA Bobde and the Supreme Court, should be pardoned with a warning, the government’s top lawyer said today.

“If you are hurting someone, then what is wrong in apologizing,” Justice Arun Mishra said. “For how long the system will suffer all this? I am retiring in a few days. Will it be okay if you or others start attacking me? You should apply balm if you have caused hurt.”

He said the tweets represented a bonafide belief that he holds and an apology, conditional or unconditional, would be insincere, in a 100-page statement. Retracting now would be a “contempt of my conscience” and the court, he said.

Mr Bhushan’s lawyer Rajeev Dhavan said, “this institution must take criticism, and not just criticism but extreme criticism. Your shoulders are broad enough.”

The lawyer said, “don’t make him a martyr

Meanwhile, Dhavan also argued that an apology cannot be coerced.

According to Dhavan, Mr Bhushan can be forgiven with a message, not even a reprimand or warning. “Such reprimand or bald warning is too broad and shouldn’t be done. One cannot be silenced forever. A message that he should be little restrained in future should be enough.”

“You have to differentiate somewhere. Fair criticism is not a problem, it is for the benefit of the institution… If we are going to destroy each other, who will have faith in this institution? You have to be tolerant, see what the court is doing and why. Don’t just attack. Judges can’t go to press to defend themselves or explain,” Justice Mishra said.