Support Us
More
More
HomeCURRENT AFFAIRSThe Great Tale of Hinduism: A book which uncovers the principles of...
CURRENT AFFAIRS
September 25, 2020

The Great Tale of Hinduism: A book which uncovers the principles of Hindu ethics in modern age 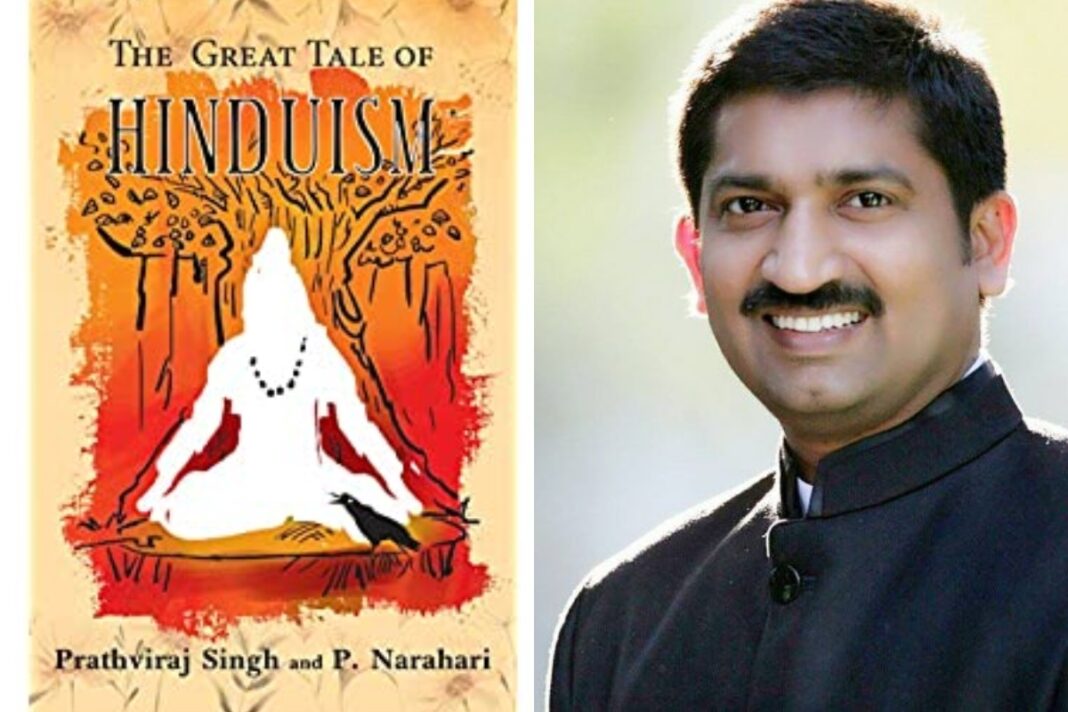 Hinduism — world’s third highest religion with over 1.25 billion followers — has provided human beings with some of the most valuable life lessons.

The oldest surviving religion, Hinduism, has transcended the barrier of time and have managed to keep pace with today’s progressive world. Perhaps, this can be the reason why Hinduism has such dedicated devotees even in the time when science has almost discarded the idea of gods and its teachings.

Written by IAS officer P. Narahari and Prithviraj Singh, ‘The Great Tale of Hinduism’, covers the strength and depth that Hinduism offers even when the most of the world has turned reluctant to the adherence of religions.

The book is a representation of ground values on which Hinduism is created. Besides extensive view of Hindu teachings, the book advances towards religion, philosophy, mythology along with science, politics and arts.

Women have been panoramicly helped into shaping the world for what it is known today. The book provides a thorough explanation on the role of women along with past and the future of humanity.

The authors in the book have explained the role of Hinduism in the foundation of the civil society. Along with evolution, conception and sustenance of Indian society via Hinduism and its teaching, the authors have tried to dictate the mythological tales of Hindu texts.

Hinduism has some of the greatest inspiring tales to offer. From selflessness to righteousness, its devotees have followed the path of morality throughout their lives. It is evident that the change is constant, and with the introduction of technology, the process has even fastened, but Hinduism’s capability to adopt changes while still being tied to basic principles has remained significant since ages.

‘The Tale of Hinduism’ will help readers uncover the fact that Hinduism remains attached and relevant to its core values and will continue to do so even in the times to come.

Prithiviraj Singh, who is a trained engineer, begun his career as a businessman. His volition to strive for knowledge in different fields and aspects lead him to discover new places of India. He pursued courses in various disciplines such as Indian economy, financial planning, business strategy and Indian politics.

Alonside his learning process, he also worked as a journalist, which helped him in his unbridled quest to learn about the authentic India.

The Tale of Hinduism is his first book.

Parikipandla Narahari also known as P. Narahari is an Indian civil servant employed by the Administrative Services (IAS) officer of the 2001 batch. He is also a renowned author and lyricist. Narahari, an avid social media user, has been recognized as one of the 10 most inspiring IAS officers of the year 2017. He has been awarded with more than 45 awards for his performance in his administrative career till now.

A Bibliophile, Narahari, is known for writing four books — ‘Who Owns Mhow?’, ‘The Making of Ladli Laxmi Yojna’, ‘Betiyan’ and ‘The Rise of Social Media in M.P. Government’.

The Tale of Hinduism is his fifth book.