Support Us
More
More
HomeCURRENT AFFAIRSVishwaKarma Puja: Know when is Vishwakarma Jayanti, what is the importance of...
CURRENT AFFAIRS
September 16, 2021

VishwaKarma Puja: Know when is Vishwakarma Jayanti, what is the importance of worship and auspicious time

VishwaKarma Puja 2021: According to the belief, Lord Vishwakarma is considered to be the world's first engineer and architect. Industries, factories and machines of all kinds are worshiped on this day, artisans worship their tools and work is stopped. 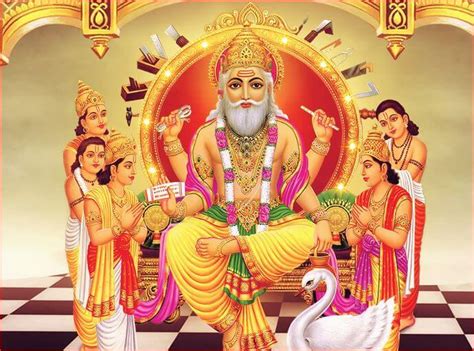 These capitals were built in ancient times by Vishwakarma

It is believed that all the capitals were built in ancient times by Lord Vishwakarma. ‘Swarg Lok’ of Satyuga, ‘Lanka’ of Treta Yuga, ‘Dwarika’ of Dwapar or ‘Hastinapur’ of Kaliyuga. It is also said that the immediate creation of ‘Sudamapuri’ was done by the creator Vishwakarma.

According to the legend, at the beginning of the creation, first of all, Narayana i.e. Lord Vishnu appeared on the Shesha bed in the ocean. From his navel lotus, the four-faced Brahma was visible. The son of Brahma was ‘Dharma’ and the son of Dharma was ‘Vastudeva’. It is said that Vastu was the seventh son born from a woman named ‘Vstu’ of religion, who was the original originator of Shilpa Shastra. Vishwakarma was born from the same Vastudev’s wife named Angirasi. Like his father, Vishwakarma also became a unique master of architecture.

Lord Vishwakarma has many forms

Lord Vishwakarma has many forms. Two-armed, four-armed and ten-armed, and one-faced, four-faced and five-faced. He has five sons named Manu, Maya, Tashta, Shilpi and Daivagya. These five were well versed in different styles of architectural craft and they invented many things. In this context Manu is associated with iron, Maya with wood, Tashta with bronze and copper, Shilpi brick and Divine with gold and silver.

Vishwakarma Puja will be organized on Kanya Sankranti. The holy period of Sankranti will be worshiped from 6:07 am on Friday, September 17, till 3:36 am on Saturday, September 18. Worship is prohibited only during the time of Rahu Kaal. On September 17, Rahukaal will remain from 10:30 am to 12 noon.