The National Democratic Teachers Front, in their statement which was issued last week, had said that they "fully support" the changes made to the English syllabus of the fifth semester BA Honours course of Delhi University. 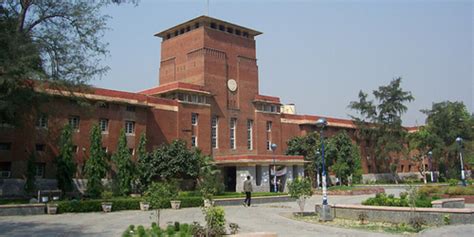 The group, backed by Bharatiya Janata Party, also demanded that the DU administration should “scan” all other syllabi of the English Department in order to remove similar “demeaning” references. They also added that “Leftists” spread “false propaganda that many Dalit writers have been removed”. The Delhi University’s Oversight Committee has removed the works of two Dalit authors, Bama and Sukhirtharani, as well as famous author Mahasweta Devi’s short story “Draupadi” from the English Syllabus.

The Statement by English teachers

We would like to point out that after our General Body Meeting, there had been an open call for the creation of committees and each and every teacher who expressed an interest was welcomed and included,” the statement by English teachers read. More than 150 teachers participated in the framing of the syllabus, many gave worthy  recommendations of particular texts and readings, and even more responded with their feedback, which came college department wise, it said. At each point, participants brought to the meetings an academic rigour that comes from years of research and reading, the statement said, adding, “To reduce this to ‘Leftist ideology’ is to defame the work of so many different teachers who came together without personal, political biases.”

The NDTF in their reply to English teachers has said that, it is an unfortunate fact that a section of teachers in the English Department exploited academic self-reliance and freedom in an attempt to defame and demonise Hinduism and the ancient civilisation to perpetuate animosity between social castes, to encourage militant Maoism and Naxalism amongst tribals, etc.

The English teachers said, “Further, in the NDTF’s causeless invoking of Hinduism and the dangers to it from Devi’s story is every attempt to silence Draupadi, who remains one of Hindu mythology’s most powerful women characters. In excluding a reading of Draupadi’s revenge upon her perpetrators lies the fear of strong, powerful women who valiantly defy men and fight the patriarchy.”