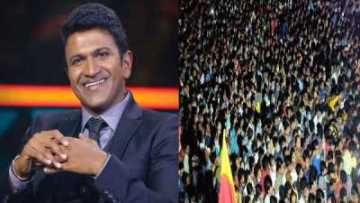 Kannada actor Puneeth Rajkumar died at just 46 years. He was admitted to the hospital at 11.30 am on Friday due to a heart attack, after which he died shortly after. His mortal remains were kept at the Kanteerva Stadium for a public tribute. His fans are deeply shocked by the death of Puneeth Rajkumar. Everyone was seen crying in the crowd of fans gathered for his last glimpse. At the same time, when news has come out that a fan committed suicide in shock due to the death of Puneet and 2 fans died of heart attack.

It is being told that a fan of Puneeth Rajkumar committed suicide after hearing the news of the actor’s death. The name of this fan was Rahul Gadivadara, a resident of Athani in Belgami district of Karnataka. Before dying, he decorated the photo of his late star Puneeth Rajkumar with flowers and then hanged himself.

Chamarajanagar district of Karnataka was shocked to learn about the death of his beloved star. As soon as Puneeth’s die-heart fan came to know about the actor’s death, he was stunned and started crying a lot. Then he got chest pain and he died on the spot due to a heart attack. He was doing petty work in Bangalore for seven years. He had returned to his native village two years ago after the Covid-19 lockdown. He was taken to Ponnachi Primary Health Center for treatment but his doctors declared him brought dead.