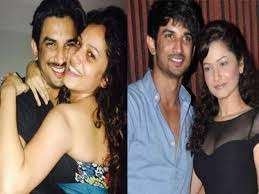 In Sushant Singh Rajput death case, the actor’s ex-girlfriend Ankita Lokhande on Saturday tweeted about that reports that the ‘Kedarnath’ actor paid EMIs for her Mumbai flat.

In tweet, Ankita shared screenshots of her bank account statements from 1st January 2019 to 1st March 2020, in which the EMIs were being deducted from her own account on a monthly basis.

‘Here i cease all the speculations. As transparent as I could be,’ w ..