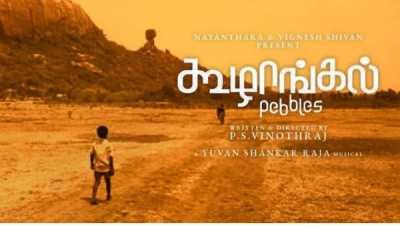 PS Vinothraj’s first film as director, Koozhangal (Pebble), will be sent for Oscars 2022. Its official announcement has also been made by India. The film is produced and presented by Nayanthara and Vignesh Shivan under Rowdy Pictures banner. The producer of the film Vigresh Shivan expressed happiness while sharing this information on social media.

The film won the coveted Tiger Award at the International Film Festival of Rotterdam this year.

In February 2021, Koozhangal was screened at the 50th International Film Festival of Rotterland in the Netherlands. The film won the coveted Tiger Award at this festival. The film stars Chellapandi and Karutthadaiya in the lead roles.

Vignesh Shivan took to Twitter to share the poster of Koozhangal and announced the news. He wrote, “There’s a chance to hear this! “And the Oscars goes to“ Two steps away from a dream come true moment in our lives. #Pebbles #Nayanthara @PsVinothraj @thisisysr @AmudhavanKar @Rowdy_Pictures Can’t be prouder, happier & content.”

Koozhangal is the story of the relationship between an alcoholic father and his son.
His wife gets upset with her husband’s antics and goes to her parents’ house. After this, how the father and son win the trust of that woman is the next story.

14 films were shortlisted from India for official entry in Oscars 2022. The 14 films include Malayalam film Nayattu, Tamil film Mandela and Hindi film Sardar Udham. These films were selected by the 15-member selection committee after watching them. Shaji N Karun was the chairman of this committee. The decision to send Koozhangal for Oscar 2022 was taken unanimously.