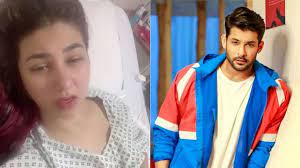 Actor-singer and former Bigg Boss contestant Jasleen Matharu has been hospitalized. Reportedly, she has been affected by the sudden death of fellow actor Sidharth Shukla, so much so that she had to be hospitalised. She has shared a video on social media wherein she informed how she landed up there.

Sharing a video from the hospital bed, Jasleen Matharu said, “The day Sidharth died, I had visited his home. I was totally shaken up – first, on hearing the news and then, seeing the atmosphere at his place. After meeting Shehnaaz and aunty, when I came home, I saw messages I had received, which said, ‘Tum bhi mar jao’. This is the first time in my life that I have been affected so badly. I thought to myself – how unpredictable is life, everything feels so strange. I don’t know what happened but I had a temperature (103 degree) yesterday and I had to be hospitalised. Take care of yourself and pray that I, too, get well soon.”

Previously, talking to Pinkvilla, Jasleen had shared her experience of meeting Shehnaaz and Sidharth’s mother and sisters, she said, “Nobody in the family is able to say or express anything. His mother, I must say is a superwoman, a strong, very strong lady who has kept herself calm in this emotional turmoil as well. She is too numb to express anything right now. His sisters also are unable to express anything. There were some things that his mother told me and it made me cry even more. I can’t really tell what all she told me, but all I can say is that it broke my heart.”

While talking about Shehnaaz, she added, “I spoke to Shehnaaz but she is not in a good state. She was just sitting at a place, blank, nothing to say, lost in her world. I went up to her, tried talking but all she asked me to do was to sit next to her. I saw how disturbed she was and asked her to sleep. Exhausted, she fell off to sleep.”

Sidharth Shukla died at the age of 40 on Thursday. Today, his family organized a prayer meet at 5 PM. The family has also invited his fans to join virtually through a zoom link.