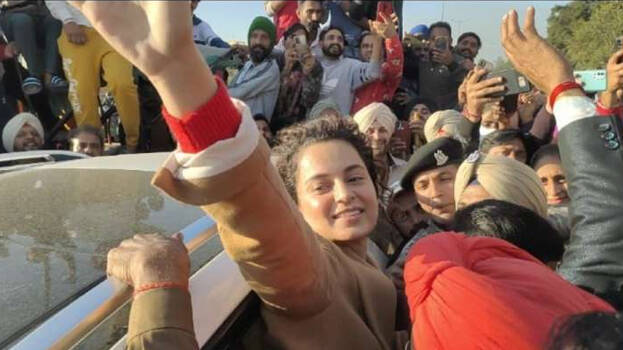 Kangana Ranaut, who often makes headlines for her controversial opinions, was surrounded in Punjab on Friday by a mob alleged by her to be farmers. The ‘Queen’ actor took to her Instagram handle wherein she shared a series of videos on her Stories claiming that her car has been attacked by some farmers.

“As I entered Punjab a mob has attacked my car… they are saying they are farmers,” she wrote.

In the video, Kangana revealed, “I have left from Himachal and arrived in Punjab because my flight was cancelled. My car has been surrounded by a mob who are calling themselves farmers and are attacking me.”

Kangana further mentioned that the mob abused her with profanities and even threatened to kill her. Calling the situation “mob lynching” the actor questioned her “safety”.

“What will happen to me if I do not have so much security with me?” asked Kangana in the video, adding that this is the result of people playing politics in her name. “If the cops wouldn’t have been here then they would be lynching openly. Shame on these people!” she said.

In a subsequent video, she could be seen shaking hands with one of the female protesters and talking to her. “Love conquers all. Everyone warned me against talking to them but I did,” she wrote along with the video.

Kangana also can be heard saying that she hadn’t said anything bad about farmers and women protesters but was referring to those who were protesting at Shaheen Bagh in Delhi. Later, Kangana thanked the Punjab Police for taking her out safely and informed her followers that she has been allowed to proceed and she is safe.