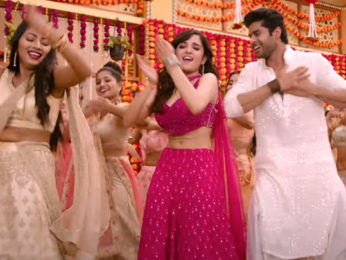 New Delhi: While title track Nikamma continues to make the country groove, the makers of the film have dropped yet another groove-worthy song titled Killer. Nikamma stars Abhimanyu Dassani, Shirley Setia and Shilpa Shetty in the lead. Talking about Killer, the song has been sung by Mika Singh and Amaal Mallik, while the lyrics have been penned by Kumaar. In the song, the lead stars are seen dancing and frolicking around.

In the song, Abhimanyu looks dapper as he dons a white kurta- pyjama, Shirley looks absolutely gorgeous in a lavishing pink lehenga, while Shilpa, on the other hand, dazzles in a yellow saree. Going by the feels of the song, it appears that the trio is at a wedding function.

Nikamma is set to be a complete masala entertainer. The film has been directed by Sabbir Khan. It has been bankrolled by Sony Pictures International Productions and Sabbir Khan Films and helmed by Sabbir Khan of Heropanti and Baaghi fame. Nikamma is a remake of the 2017 Telugu action-comedy film, Middle Class Abbayi starring Natural Star Nani and Love Story actress Sai Pallavi.