Support Us
More
More
HomeENTERTAINMENTPrem Chopra birthday: When Big B travelled across desert to wish the...
ENTERTAINMENT
September 23, 2021 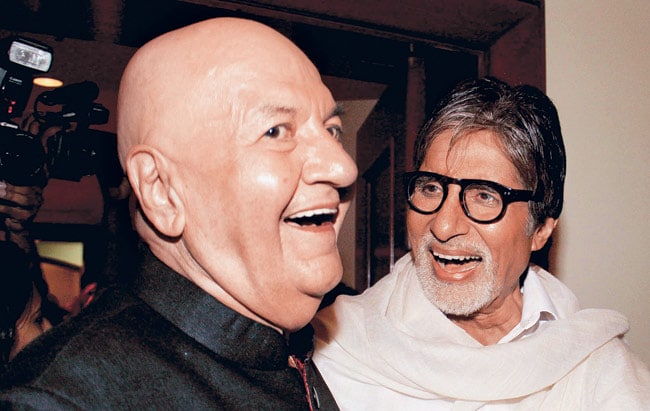 Mumbai: One of the most loved villains of all time – Prem Chopra – celebrated his 86th birthday today. In his extensive career in Bollywood, the actor has earned a special place for himself in the film industry. He has acted in 380 films over a span of over 60 years. Despite being a villain in most films, he has garnered fame for his kind nature. As the actor celebrates his special day today, let’s take a trip to memory lane to the time when Amitabh Bachchan travelled across a dessert to find a phone so that he could wish the actor.

During an interview with Filmfare, Prem Chopra said, “He (Amitabh Bachchan) minds his own business. He doesn’t gossip, nor does he talk ill of anyone. That’s the secret to his success.”

“Distributors would refuse to touch his reels. But even in those days, he had tremendous self-confidence. Once we were shooting for Gehri Chaal (1973). Director Sridhar, Amitabh and I were drinking. Sridhar said, ‘I’ll be finished if this film doesn’t work’. Amitabh pepped him up saying, ‘I’ve been a failure but I refuse to give up. I’m confident that I’ll make it and to the top’,” recalled Prem Chopra.

The veteran actor remembered seeing Amitabh Bachchan for the first time and saying ‘He will spell trouble for other heroes.’

“Once the late Navin Nischal, my neighbour, invited me for the preview of Parwana (1971) at Dimple theatre. After watching it, I told him, ‘This film won’t run! But who is this tall boy? He will spell trouble for other heroes’,” said Prem Chopra.

Prem Chopra has enjoyed a good run with Amitabh Bachchan. The celebrated pair has worked together in a slew of films, starting from Pyar Ki Kahani to Gehri Chaal, Do Anjaane, Trishul, The Great Gambler, Dostana, Naseeb and others.