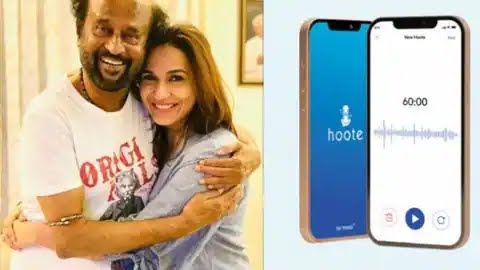 “Hoote – Voice based social media platform, from India for the world,” he tweeted along with the link of the platform.

On October 24, Rajinikanth took to social media to share a statement about why October 25 is an important occasion in his life. He spoke about his Dadasaheb Phalke win and his daughter Soundarya excelling on the professional front.

His statement read, “Second, my daughter Soundarya Vishagan, by her independent efforts has pioneered the making of a very useful app for people called “HOOTE” and she is going to introduce it to the world from India. People can now express through their voice their thoughts, wishes and ideas just like they do in writing in any language of their choice. I am very happy to launch this innovative, useful and the first of its kind the “HOOTE APP” in my voice (sic).”

Rajinikanth’s movie debut was back in 1975 when he starred in K Balachander’s ‘Apoorva Ragangal’. Rajinikanth’s latest action movie “Annaatthe” is all set for a Diwali release.