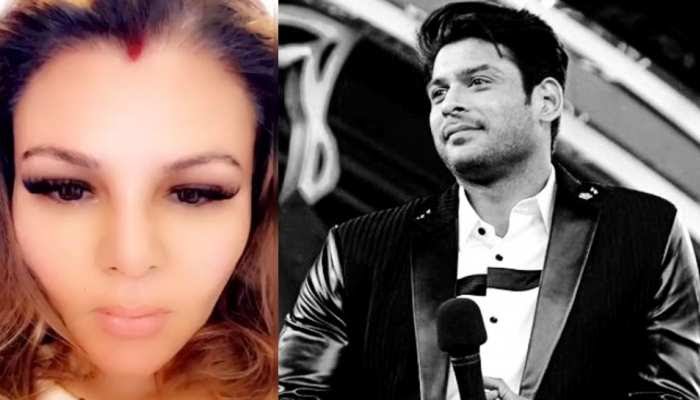 Today 5 days have passed since Siddharth Shukla passed away.He said goodbye to this world on 2 September.Not only his close and his loved ones are upset due to the death of TV actor Siddharth Shukla, but the entire TV industry is shocked.Many people are broken due to the untimely demise of the actor.His friends and loved ones are constantly praying for him and his family.No statement has been given from Siddharth’s family members and the police regarding the reason for his death.

After the death of Siddharth Shukla, on the basis of preliminary investigation, the cause of his death was said to be a heart attack.The post-mortem report was kept in reserve.The police and forensic team do not want to be negligent in this matter.Therefore, only after a thorough investigation will a conclusive statement be issued.In such a situation, many people are anticipating that there is some mistake.After Kamal Rashid Khan, now Rakhi Sawant has also made a video.In this video, Rakhi Sawant has made shocking claims.

Rakhi Sawant made a video regarding the death of Siddharth Shukla, in which she is seen wearing vermilion.He said in the video, ‘Hi friends, I am still at home, I am not able to get out anywhere.Siddharth’s death has shaken a lot, but just now it has been learned that friends did not have a heart attack, so how did he die.

In the post-mortem report, different doctors did the post-mortem for three and a half hours and they said in the post-mortem report that if the heart attack did not kill, then what has killed. A lot of things have been sent for investigation to find out, I am very worried.On the death of Siddharth Shukla, Rakhi Sawant further said, ‘The glass of his BMW car was also broken, with whom did he quarrel?It is said that between 8 and 8.30 o’clock he went to meet someone and then came home and said that his health is not well, then at three o’clock in the night said that my health is not well.

Then ate some medicine, what was that medicine. There was a fight in the building.The glass of his car was broken.Oh my god, what is the truth?In front of his fans, in front of us.Was there any pressure, due to which there was a fight, which medicine was eaten.Only doctors can tell these things.The post-mortem report said that his fans, me and the people of the country want to know.I am getting very dizzy after hearing this.If it wasn’t a heart attack then what was.Posting this video, Rakhi Sawant wrote in the caption, ‘Friends, I am shocked, are these people telling the truth that there was no heart attack.I want to know the doctors of Cooper Hospital, please tell me, please tell me the cause of death.’ Fans are commenting a lot on Rakhi’s post.While many fans are trusting Rakhi’s words, there are many fans who are telling Rakhi as a dramatist.

People say that Rakhi is doing this for publicity.How much truth there is in Rakhi’s words, it cannot be confirmed.In the past, Bigg Boss fame actor Siddharth Shukla (Sidharth Shukla) left this world leaving his crores of fans.According to the information, on September 2, he had a heart attack, after which he was taken to Cooper Hospital and there he was declared dead.He was cremated the next day that is on 3rd September.His loved ones and family gave him a final farewell.Siddharth Shukla was only 40 years old.His family consists of his mother and two sisters.