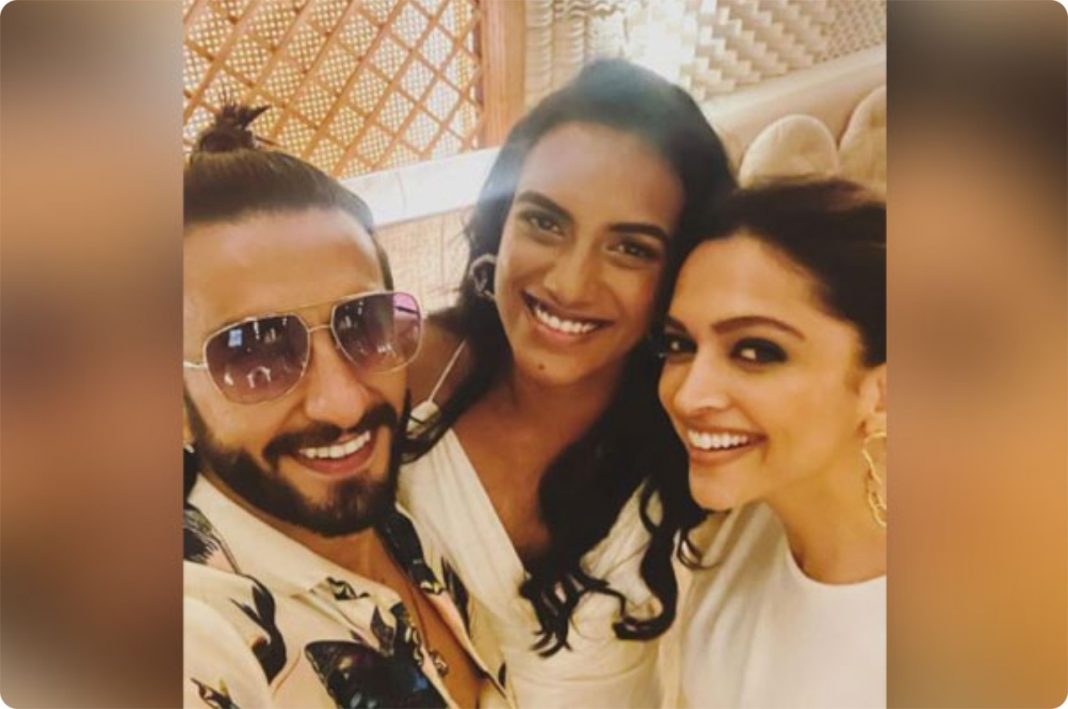 It was a smashing weekend for power couple Ranveer Singh and Deepika Padukone who met two-time Olympic medalist shuttler, PV Sindhu. The trio stepped out in the town for an intimate dinner night in the town.

Taking to his Instagram handle, Ranveer posted a selfie from their dinner night at a restaurant in Worli. Donning their brightest smiles, the stars made their best glamorous appearances for the night. Sharing the picture, Ranveer wrote, “Smashing time! @pvsindhu1 @deepikapadukone.”And re-sharing the post on his IG story, he wrote, “Laakon me ek! Celebrating @pvsindhu1.”

The weekend outing of the trio was also captured by some shutterbugs and videos and photos of the same has been making around on the internet. Deepika looked as ethereal as always in a white puff top and black bell-bottom pants accessorized with matching jewellery. She kept her hair tied in a neatly styled bun. Sindhu was also seen twinning with the ‘Piku’ star in a bodycon dress. Meanwhile, heart-throb Ranveer opted for a casual look. He sported a patterned shirt with a pair of rugged jeans.

Meanwhile, Deepika has been a slew of projects lined up for the year. She has an impressive line-up of projects in the pipeline including ’83’, ‘Baiju Bawra’, ‘Fighter’, ‘Sanki’, ‘Pathan’, and ‘K’, which is the Indian adaptation of Nancy Meyers’s 2015 hit Hollywood film ‘The Intern’, and will also feature megastar Amitabh Bachchan.

On the other hand, Ranveer Singh will star in Kabir Khan’s 83, Jayeshbhai Jordaar and name a few.

Related Story: Tokyo Olympics has been an experience that I will not forget: PV Sindhu