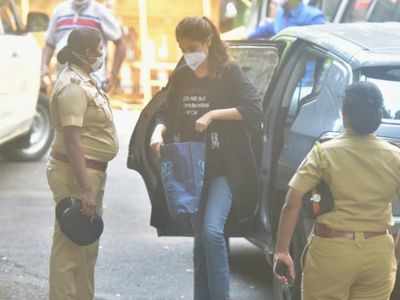 In a major breakthrough, the Narcotics Control Bureau on Tuesday arrested Bollywood actor Rhea Chakraborty after grilling her for three consecutive days in connection with drug trafficking.

She has been charged under various sections of NDPS act for her alleged role in drug nexus which has come into light after the death of actor Sushant Singh Rajput.

According to media reports, Rhea reportedly admitted to organizing drugs for Sushant Singh Rajput and consuming them, during NCB’s grilling.

The 28-year-old actress had earlier denied using drugs in her interviews.

Rhea has also been taken to hospital for a medical test and will most likely be produced before a magistrate through video-conferencing for remand in the evening.

Rhea’s lawyer Manshinde called it a ‘travesty of justice’ and said that she was being punished as a consequence of falling ‘in love with a drug addict who was suffering from mental health issues’.

“Travesty of justice. Three central agencies hounding a single woman just because she was in love with a drug addict who was suffering from mental health issues for several years and died by suicide due to consumption of illegally administered medicines, drugs,” the senior advocate told ANI.

Earlier, on Monday, Rhea had filed a police complaint against Sushant’s sisters — Neetu Singh and Priyanka Singh — at Mumbai Police Station, claiming that they prescribed drugs to him without consultation.

In a six-page long complaint filed on Monday, the actress said that Sushant passed away five day after he obtained unlawfully prescribed drugs by his sisters and a doctor from Ram Manohar Lohia hospital.

Rhea is the prime accused in the death of Sushant Singh Rajput and is currently being investigated by CBI along with the NCB and ED in the same light. Rhea’s brother Showik, Sushant’s house manager Samuel Miranda and house help Dipesh Sawant have already been booked by the NCB in the ongoing drug probe.