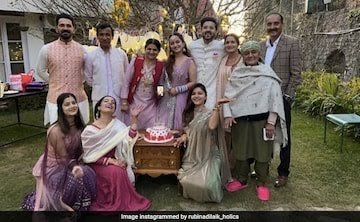 Rubina Dilaik’s sister Jyotika Dilaik has got engaged, some pictures have surfaced on social media. In these pictures, Jyotika can be seen with her fiance. Rubina and her husband Abhinav Shukla are also seen in these photos. These pictures are becoming fiercely viral on social media, on which people are giving their respective reactions. Jyotika is engaged to her long term boyfriend Rajat Sharma. Jyotika Dilaik has also written a cute note while sharing the engagement photos.

Jyotika Dilaik has written, We met about 9 years ago and see where we have reached. Looking at the sky, it seems that it is full of colors. Congratulations Rajat.

At the same time, Rubina also shared a video of Jyotika’s engagement and wrote, Can’t believe she has grown up now. And I am very happy for you. Rajat ab tum family ho (was there before but now officially).

As soon as Rubina Dilaik shared this news, her fans started congratulating her for Jyotika. At the same time, Rajat has also shared the engagement photo on his Instagram account.

Rubina Dilaik is a well-known TV actress, who has been seen working in many TV shows. Although Rubina got her real identity from ‘Shakti: Astitva Ke Pehchan Ki’ and ‘Chhoti Bahu’. After this Rubina gained a lot of popularity by winning the Bigg Boss 14 winner trophy.