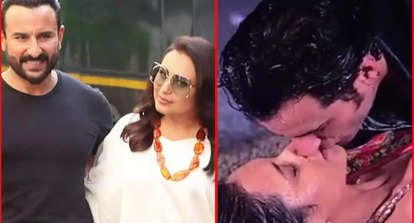 Saif Ali Khan and Rani Mukerji, who will be seen together in Bunty Aur Babli 2, recalled working in Hum Tum and how they were both ‘uncomfortable’ while shooting for the kissing scene in the film. He revealed that she tried to convince him to say that he did not want to kiss her.

He continued with the story, ‘So, I arrived on set, and you were being extra nice to me that day, and you were saying, ‘How are you? How was the drive? What’s happening?’ According to Saif, Rani then quietly asked him to tell people that he didn’t want to kiss her. Saif continued, as Rani laughed, ‘I said, ‘I can’t say that! My boss has told me, so I have to do it.’ Rani hesitated some more, before finally agreeing, according to the actor.

Saif mimicked the grimace that Rani had on her face during the shoot, while she laughed and said ‘It was the worst kiss in the history of cinema. It was very uncomfortable’. ‘It was very uncomfortable’, she agreed. Despite this, the romantic movie became a superhit and Saif won a National Award for his performance, which even took him by surprise.

Bunty Aur Babli 2 will mark Saif and Rani’s reunion after more than a decade. They were last seen together in Thoda Pyaar Thoda Magic in 2008. In Bunty Aur Babli 2, Saif and Rani will be chasing a con-artist duo, the new Bunty and Babli, played by Siddhant Chaturvedi and Sharvari, respectively. The film, directed by debutant Varun V. Sharma, is due for a theatrical release on November 19.