Salman Khan birthday: Superstar dances the night away with Genelia 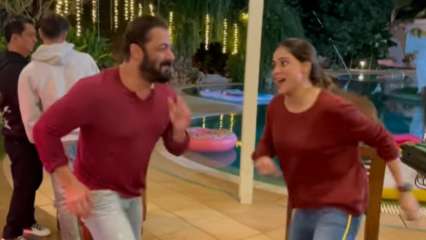 Salman Khan celebrated a star studded birthday bash on Monday. Thanks to Genelia Deshmukh, we hav got a sneak peak into the starry celebrations. The ‘Jaane Tu Ya Jaane Na; actor shared a video of superstar from his 56th birthday. In the videos, Salman is seen dancing his heart out with Genelia.

On Monday, Genelia took to Instagram and shared the video of her shaking a leg with Salman. They both danced their heart out in the video. Also, both of them can be seen twinning in maroon T-shirts.

“Happy Birthday to the man with the largest heart. May God bless you with loads of happiness, love and great health. We love you – Aaj Bhai ka birthday hai. @beingsalmankhan,” she captioned the post. Salman and Genelia’s video has left netizens in awe.

Reacting to the clip, a social media user commented, “So sweet. Love you Salman.”
“The best video. May he always smile like this,” another one wrote.

Salman and Genelia have worked together in ‘Jai Ho’. Genelia had a cameo in the film.

Meanwhile, on the work front, Salman confirmed that he and superstar Shah Rukh Khan will be doing cameo crossovers in each other’s films — ‘Tiger 3’ and ‘Pathan’. “We will both be seen in ‘Tiger 3’ as well as in ‘Pathan’. Tiger will release by December next year. ‘Pathan’ may release before it, aur phir dono shayad saath aayenge,” Salman said.

The actor also confirmed that the follow-up of ‘Bajrangi Bhaijaan’ is being written by veteran screenwriter KV Vijayendra Prasad, who also wrote the first installment. He revealed that the sequel is tentatively titled ‘Pavanputra Bhaijaan’.