Shahid Kapoor is intense as ex-cricketer in ‘Jersey’ trailer 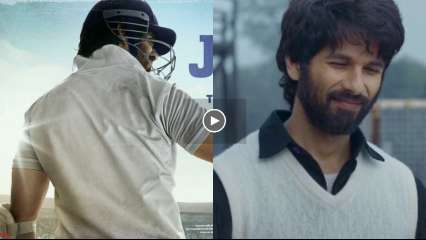 The much-anticipated trailer for actor Shahid Kapoor’s upcoming movie ‘Jersey’ has finally been dropped on Tuesday.The cricket-themed film which stars Mrunal Thakur as the female lead is a remake of a Telugu National Award-winning movie of the same name.

Mrunal took to his Instagram handle and shared it along with the caption, “Unleash the power of dreams for the ones you love! Here’s presenting the #JerseyTrailer.”
Gripping the fans with excitement, ‘Jersey’ sees Shahid in a never-before-seen avatar. Set against the backdrop of India’s favourite sport, cricket, the movie highlights the story of an underdog and celebrates the human spirit.

The almost 3-minute long trailer for ‘Jersey’ gives fans a glimpse into the lives of the ex-cricketer and his wife. It opens with a jobless Shahid trying to fulfil his son’s dream to buy a jersey. After trying to get his wife to give him some money and getting her refusal, he then goes door-to-door, trying to arrange money but eventually ends up trying to steal money from his wife’s wallet.

With the dream of representing team India one day and fulfilling his son’s wish for a jersey as a gift, a man in his mid-30s returns to cricket by the end of the trailer.
‘Jersey’ has been mounted on a lavish scale by its presenter Allu Aravind and producers Aman Gill, Dil Raju and S Naga Vamsi. Aravind was even spotted today at the trailer launch event of ‘Jersey’.

Other than Shahid and Mrunal, it also features Pankaj Kapur in a pivotal role. The movie has been directed by the National Award-winning filmmaker Gowtam Tinnanuri, who has also helmed the original Telugu ‘Jersey’.

The music directors of ‘Kabir Singh’, Sachet and Parampara, have composed chart-busting tunes for Shahid once again in ‘Jersey’. The film will release in theatres on December 31, 2021.