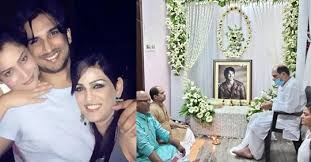 Sushant sisters letter said, “The first daughter had magic, someone came and took her away to a foreign country. The second one played for national cricket team while the third one did a study on the law. The fourth daughter did a diploma in fashion designing. The fifth one was Sushant, who was ‘mannat’ of his mother. Whole life the family did not take anything from anyone, neither harmed anyone.”

Talking about sudden death of Sushant’s mother and his rise in the film industry, the letter said, “People only dream about what happened in the last 8-10 years”.

While actor Rhea Chakraborty, name has not been mentioned in the letter, it said Sushant was ‘brutally murdered’ and that ‘crooks trapped’ him. The letter also questioned how expensive lawyers are being hired in the case against them, wondering if they will ‘murder’ justice.

Sushant Singh Rajput’s family has issued a 9-page letter on the probe. The letter issued after an editorial written by Shiv Sena’s Sanjay Raut in Saamna, where he questioned the relationship between the actor and his family.