This Friday Team ‘TMKOC’ will be seen on KBC 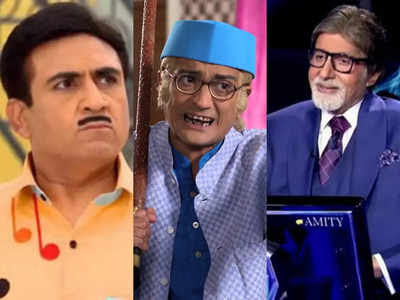 In a new promo shared by Sony Entertainment Television, Dilip (as Jethalal) is heard asking Amitabh if he still scolds his son, actor Abhishek Bachchan. He seems to be hinting at Bapu Ji, who often screams at him and calls him names for messing up the smallest tasks.

Amitabh tells him that he used to do that when Abhishek was young but not since he grew up. “You must still scold him politely. ‘Hum krodhit hogae hain, aap aisa mat kijiye (I am angry with you, don’t do this),” Dilip said, leaving Amitabh in splits. He clarified, with some nervousness, that Bapu ji never screams at him. But clips from their show reveal otherwise.

Babita ji, Dr. Hathi, Sodhi and many other actors from Taarak Mehta Ka Ooltah Chashmah are seen seated among the audience. They all laugh out loud when the host asks Jethalal if his father shouts at him.

This episode will surely be a treat with Gokuldham Wasis spicing up the entertainment bit.

Several of the recent episodes of KBC have hosted celebrities. The show recently completed 1000 episodes and on the occasion, Amitabh was joined by his daughter Shweta Nanda and granddaughter Navya Naveli Nanda. Jaya Bachchan also joined in via video conferencing.

Talking about the show, it airs from Monday to Friday at 9 pm.